situation:
Sri Lanka is a de facto abolitionist country since 1976.
Capital crimes are: murder, causing an innocent person to be executed by bearing false witness, offences against the State, economic offences, drug offences and arms trading.
The island’s history of executions goes back to when Sri Lanka was the British colony known as Ceylon. The first hanging was held on 11 February 1884, at Welikada Prison. During that time, a total of 1,868 men and women were executed.
The last execution was carried out on, 23 June 1976 – nearly 20 years after Sri Lanka achieved independence – when Jayasinghe Chandradasa, a 27-year-old farmer convicted of murder, was hanged to death.

According to the Prisons Act, condemned prisoners are not allowed to mingle with the convicted prisoners, and have to be kept in isolation. They have a tiny cell and a small corridor leading to their cells away from their fellow prisoners, and they do not even see or hear each other. The only privilege they have is to walk along the corridors of their cells.
After searching for an executioner for three years, in October 2015, Sri Lanka’s Prison Department Sri Lanka said it had hired two new executioners to replace the previous hangman. It had appointed the latest hangman in March 2014. However, the hangman selected for the job got distressed on seeing the gallows for the first time and resigned from the post. Two other hangmen hired in 2013 failed to show up for work.
Many attempts have been made by various governments to resume executions, but with no result due to large-scale protests that occurred in the country.
On 14 September 2015, Foreign Minister Mangala Samaraweera in his address to the UN Human Rights Council in Geneva stated that Sri Lanka would not implement the capital punishment. However, on 18 September, President Maithripala Sirisena, told a meeting in Galle that he would implement capital punishment if parliament approved. Though the penalty can be imposed via his executive powers, “I thought that the better option was debate in the parliament,” he said. “As a leader who respects moral principles, I will pay strict attention to the demand of the people to enforce the death penalty.”
On 6 October 2015, Minister of Justice Wijeyadasa Rajapaksha told the parliament that Sri Lanka will not implement the death penalty temporarily as the country has decided to vote in favor of the UN resolution for a moratorium on the use of the death penalty when the vote is taken at the UN General Assembly. Emphasizing that more than 100 countries have abolished the death penalty, the Minister told the parliament that especially in democratic countries punishments are aimed at correction and rehabilitation. The world opinion with regard to the capital punishment is in favor of not implementing it, he added.
On 4 January 2016, the Human Rights Commission of Sri Lanka (HRCSL) in a letter to the President recommended the abolition of the death penalty in Sri Lanka. The Commission, set up by the Government in 1996 to promote and protect human rights in the country, in the letter states that death penalty should be abolished in keeping with Sri Lanka's commitment to a more humane society consonant with human rights, principles and values.
On 9 April 2017, a special Task Force (TF) appointed by the Cabinet to look into congestion in prisons tabled a report in Parliament by Chief Government Whip, Parliamentary Reforms and Mass Media Minister Gayantha Karunatileka, to propose that, the Government consider commuting death sentences to life imprisonment, and consider parole for those serving life sentences according to the existing laws. "The Govt. has to consider alternative action to manage overcrowding of prisons, as life sentenced and death penalty prisoners contribute greatly to overcrowding. To date, there are a total of 1,082 persons on death row, 726 cases remain under appeal, while Life sentence prisoners total 555, with 463 cases under appeal," the report said. Sri Lanka's prison population at present stands at around 17,000 (7,496 convicted prisoners, 8,351 remand prisoners and 1,143 prisoners whose cases are under appeal)


In July 2018, President M. Sirisena announced that he was ready to implement the death sentences on the convicted drug dealers, who continue drug trafficking in the country from within prisons and after that, on 10 July 2018, the Cabinet has unanimously approved a move to bring back capital punishment for drug-related crimes.
In January 2019, Sirisena after his visit to the Philippines said he wanted to “replicate the success” of Rodrigo Duterte’s ruthless approach to tackling illegal drug use, which he called “an example to the world.” In March, the United Nations high commissioner for human rights, Michelle Bachelet, reported to the UN Human Rights Council that up to 27,000 people have been killed in the Philippines’ anti-drug campaign. Sirisena was quoted to say “I hope to carry out the first hanging within a month or two,” and “I appeal to human rights organisations not to try to pressure us on this decision.”
According to data realesed on 9 January 2019, by the the Ministry of Justice and Prisons Reforms, a total of 1, 299 death row inmates, have been detained in Sri Lankan prisons as of December 31 2018. It said 1,215 male inmates and 84 female inmates were among them. “Among the 1,299 convicts, 789 male and 34 female convicts had appealed against their sentences,” the Ministry said. The Ministry said death sentences of approximately 426 male convicts and 50 female convicts have been confirmed. According to Harm Reduction, 60 people, of which 6 women, have been setenced to death for drug since 2008 to the end of 2018.
What is more, in February 2019, the government began advertising in local newspapers for a hangman, seeking male candidates between ages 18 and 45 with “excellent moral character” and “a very good mind and mental strength.”

Commutation of the death penalty or suspension of executions
In 2018, President Sirisena di not commute death senteneces as he did in previous years.
President Maithripala Sirisena has commuted 247 death sentences to life imprisonment since he assumed office in January 2015. President Sirisena gave such concession to 34 death row inmates in December 2015. Another batch of 83 such prisoners got their sentence commuted to life on 22 April 2016, and 70 more prisoners had their sentences commuted on 27 May 2016.
On 2 February 2017, the Sri Lankan President Maithripala Sirisena has decided to commute the sentences of 60 prisoners in death row to life sentences prisoners on account of the 69th Independence Day on February 4. The death row convicts will be considered for parole only after they served a minimum sentence of 20 years and their pleas for any relief will be referred to the parole board once in four years after that.
Although Sri Lankan courts give death penalty in serious crimes such as murder, rape and drug trafficking, no executions have been carried out since 1976.
The death sentences were commuted on recommendations made by an expert committee established by the previous government in October 2013 and headed by retired Supreme Court judge Nimal E. Dissanayake. The committee included Secretary to the Justice Ministry, additional Solicitor General and Prisons Commissioner. The committee had inquired into cases of nearly 400 convicts out of nearly 1,200 on death row and recommended the commutation of their death sentence. Some prisoners on death row have served between 20 to 30 years inside their cells.

The death penalty on women
In Sri Lanka, at the end of 2018, there were 85 women on death row out of a total of 1,299 people sentenced to death. 50 are definitive, according to the Minister of Justice and Reform of Prisons. According to Harm Reduction, since 2008, at least 60 individuals were sent to death row for drug offences, of which six were women.

The war on drugs


Despite Sri Lanka is a de facto abolition, the last execution  dating back to 1976, in July 2018 President Sirisena announced to be ready to implement the death sentences on the convicted drug dealers, who continue drug trafficking in the country from within prisons and on 10 July 2018, the Cabinet has unanimously approved a move to bring back capital punishment for drug-related crimes [see chapter: Reintroduction of the death penalty and resumption of executions]. It is a crackdown inspired by the Philippines’ brutal war on drugs.
Death sentences for possession and trafficking of controlled substances are reported every year. According to Harm Reduction Report “The Death Penalty for Drug Offences: Global Overview 2018”, since 2008, at least 60 individuals (of which six were women) were sent to death row for drug offences.
At least six new death sentences for drug offences were handed down in 2018; of these, four were for possession and/or trading of 2.8 to 18.2 grammes of heroin

United Nations
In March 2018, in its response to the recommendations received under the Universal Periodic Review of the UN Human Rights Council of November 2017, Sri Lanka accepted reccomendations to consider to ratify the Second Optional Protocol on Civil and Political Rights and to consider to abolish the death penalty.
On 17 December 2018, Sri Lanka voted in favor of the Resolution on a Moratorium on the Use of the Death Penalty at the UN General Assembly, as in 2016, 2010, 2008 and 2007. In 2014 and 2012 it abstained.

Sri Lanka's president on 26 March 2020 pardoned and released an army officer sentenced to death for slitting the throats of Tamil civilians, including four children, during the island's bloody ethnic war.
Staff Sergeant Sunil Ratnayake was to be hanged for the December 2000 killing in a case held up by previous Sri Lankan governments as an example of rare accountability over abuses during the conflict.
A court convicted him of murdering eight members of the Tamil minority, including a five-year-old and three teenagers after a 13-year trial.
They were killed as they returned to their bombed homes to salvage what was left of their belongings and their bodies were found buried in a cesspit near an army camp at Mirusuvil on the Jaffna peninsula.
The Supreme Court unanimously rejected the officer's appeal and upheld the death penalty last year.
But President Gotabaya Rajapaksa has now "instructed the Ministry of Justice to release Sergeant Ratnayake from prison", a spokeswoman for his office said.
The Tamil National Alliance (TNA), Sri Lanka's main political party for the minority community, condemned what it said was an "opportunistic" decision to release Ratnayake.

Colombo High Court on 13 February 2020 sentenced three accused to death for killing a person.
In addition, the three accused, Ranga Namal Kumara, Sulochana de Silva and Lakshman Chathuranga were sentenced to 10 years in prison and six months’ rigorous imprisonment and fined Rs.11,000 each by Colombo High Court Judge Dhammika Ganepola.
The Attorney General has filed indictment against the five accused in the Colombo High Court under Section 296, 300 and 315 of the Penal Code for forcibly entering a house and attempting to kill Tharanga Abeysinghe, and killing his father and seriously injuring his brother in 2015.
The First accused and the second accused were released from the case and the judge observed that the charges against the remaining accused had been proved beyond a reasonable doubt and sentenced them to death. 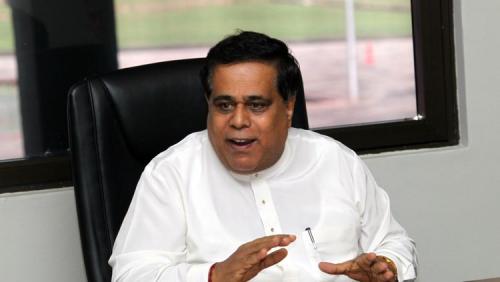