Optional Protocol to the Convention Against Torture and Other Cruel, Inhuman or Degrading Treatment or Punishment

situation:
Italy became totally abolitionist in 1994, when the death penalty was abolished from the Military Codes. The 1948 Constitution had already abolished the death penalty for ordinary crimes. On October 2, 2007, Italian President Giorgio Napolitano signed the Constitutional Law Bill that removed the last reference to capital punishment from Art. 27 of the Constitution, allowed in cases of martial law.
The bill was voted on by the Italian Senate on September 25, and by the Chamber of Deputies on May 2.
Like its European Union partners, it refuses to send prisoners to countries where they could face the death penalty.
The last execution took place on March 4, 1947 in Turin, where three men from Villarbasse, Giovanni D' Ignoti, Giovanni Puleo and Francesco La Barbero, were shot at a rifle range just outside the city. The three men had been condemned to death by the Turin Court of Assizes on July 5, 1946 (the last death sentence handed down in Italy) for clubbing to death ten people and throwing their bodies down a well while committing a robbery at the farm where they lived, which netted the accused 45,000 Lire each.
Italy has played a fundamental role in promoting on an international level the campaign for a global moratorium on executions since 1994, when it raised the question at the UN General Assembly for the first time, presenting an apposite resolution. The fact that this resolution for a global moratorium on executions was defeated by only eight votes led Italy to present a similar text at the UN Commission on Human Rights (UNCHR), where it has been approved every year from 1997-2004. In 1997 and 1998 the resolution was presented at the Commission directly by the Italian Government; while in 1999 Italy decided to place the resolution in the hands of the European Union.
On December 17, 2018, Italy once again co-sponsored and voted in favour of the Resolution on a Moratorium on the Use of the Death Penalty at the UN General Assembly. 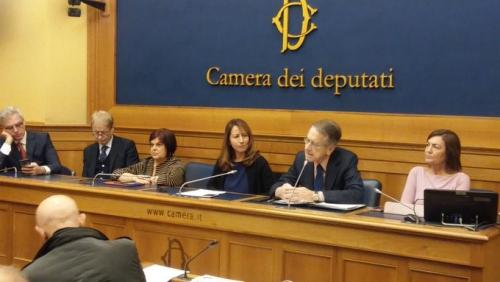 Italian Lawmakers Urge Support for Iran Protests. Press Conference in the Italian Parliament in Support of the Iran Protests.
On Wednesday, December 4, 2019, Members of the Italian Parliament and human rights organizations in Italy held a press conference in the parliament’s conference room in solidarity with the recent nationwide uprising in Iran.
The participants welcomed the cancelation of the trip to Italy by the Iranian regime’s Foreign Minister Mohammad Javad Zarif, who has the blood of the slain protesters on his hands.
This event was also attended by former Italian Foreign Minister Giulio Terzi; Italian Senators Lucio Malan and Manuel Vescovi, Italian MPs Renata Polverini, Stefania Pezzopane, and Federico Mollicone as well as Mr. Sergio D'Elia and Elisabetta Zamparutti, both former MPs and executives of the Hands Off Cain association.
Ms. Zamparutti started the press conference by giving some details over Zarif’s canceled trip to Italy and then spoke of the recent nationwide Iran protests. “The National Council of Resistance of Iran (NCRI) has declared today, that the death toll during the Iran protests has surpassed 1000, and I have the names of 255 of them identified by the Iranian Resistance,” she said. She also provided the audience with new details about the regime’s killing of minors and the massacre in Mahshahr by the regime’s repressive forces. Mr. Terzi said: “Zarif canceled his trip because he feared being held accountable for human rights abuses and massacre and also having his pictures crossed.”
Mr. Terzi then spoke about the recent nationwide Iran protests and compared them with the 2018 uprising.
While referring to the 1988 massacre of over 30,000 political prisoners, who were mostly members and supporters of the People’s Mojahedin Organization of Iran (PMOI/MEK), and highlighting that the perpetrators of this crime are still holding power and are willing to repeat this massacre, Mr. Terzi urged the international community and the Italian government to prevent this from happening.
Mr. Mollicone also criticized the Italian government for not taking a strong position on this issue.
Ms. Pezzopane, from Italy’s ruling coalition, spoke of her history of acquaintances with the Iranian Resistance and said ‘we shouldn’t be silent’ and ‘we should do something for the people of Iran.’ Senator Malan slammed the Italian government and its foreign ministry for being silent and, unlike other nations, not taking much stronger positions. “We should stand with the people of Iran,” he added. Ms. Polverini, who is also a former President of Italy’s Lazio region, said: “I met the Iranian Resistance and the friends in this room when I was the governor in Rome. We were supposed to accept some of the wounded from Camp Ashraf. We did a great job at that time and I will never forget those days. If I ever want to speak of my achievements, I refer to it.” “This conference alone is not enough. We should take more action in Parliament and other places and continue supporting the people of Iran and their Resistance,” she added. Senator Vescovi criticized the Italian government and its foreign ministry for being silent and said: “We should support this resistance.” Mr. Esmail Mohaddeth, the spokesperson of the Iranian community in Italy highlighted the importance of international support for the Iranian people’s uprising and the Iranian Resistance movement.
https://www.ncr-iran.org/en/news/iran-protests/27021-italian-lawmakers-urge-support-for-iran-protests