government:
state of civil and political rights:
constitution:
legal system:
legislative system:
judicial system:
religion:
death row: 4 (as of April 1, 2013, source: DPIC)
year of last executions: 0-0-0
death sentences: 0
executions: 0
international treaties on human rights and the death penalty:
situation:
The method of execution is injection. The sentence is determined by a jury. The death row is located at Caon City. As for the clemency process, the Governor has sole authority to grant clemency. 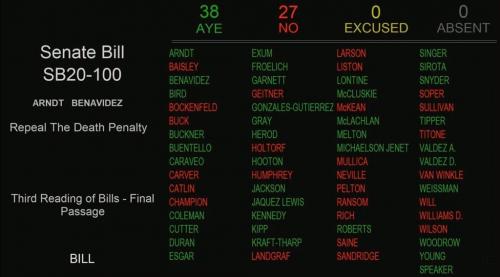 Colorado Abolishes Death Penalty. Colorado became the 22nd U.S. state to abolish the death penalty, and the tenth to do so in the past decade-and-a-half, as Governor Jared Polis signed legislation repealing the state’s capital punishment statute. Polis also issued executed orders commuting the death sentences of the three men on Colorado’s death row, Nathan Dunlap, Sir Mario Owens, and Robert Ray to life imprisonment without possibility of parole.
“Commutations are typically granted to reflect evidence of extraordinary change in the offender. That is not why I am commuting these sentences to life in prison without the possibility of parole,” Polis said in a written statement. “Rather, the commutations of these despicable and guilty individuals are consistent with the abolition of the death penalty in the state of Colorado, and consistent with the recognition that the death penalty cannot be, and never has been, administered equitably in the state of Colorado.”
The governor said he knows his decision won't be popular among all Coloradans.
“While I understand that some victims agree with my decision and others disagree, I hope this decision provides clarity and certainty for them moving forward," he said.
"The decision to commute these sentences was made to reflect what is now Colorado law, and done after a thorough outreach process to the victims and their families."
Polis’ decision to sign death penalty bill into law wasn’t a surprise. He had vowed to do so if it reached his desk.
At least one victim’s family on Monday expressed disappointment about the news.
The legislation passed the Colorado General Assembly last month with bipartisan support, but opposition to the bill — while not enough to stop its passage — was both fierce and emotional.
Two Democrats, Sen. Rhonda Fields and Rep. Tom Sullivan, vehemently opposed the repeal. Fields’ son and his fiancée were killed by Ray and Owens.
Sullivan’s son was murdered during the 2012 Aurora theater shooting and prosecutors tried unsuccessfully to sentence the gunman to death.
“It’s just hard for me to describe how I’m feeling,” Rhonda Fields said Monday. “I feel like justice was just hijacked after years and years of court proceedings. Here we are with the stroke of a pen the governor just sweeps it away.”
The death row inmates’ crimes.
Dunlap, who was sentenced to be executed in 1996, has spent the most time on death row of any inmate in modern Colorado history. He exhausted the last appeal he is legally guaranteed more than seven years ago.
Three of the people Dunlap murdered in 1993 were teenagers, working the closing shift at the Chuck E. Cheese restaurant.
The cases of Ray and Owens are still going through the appellate process. They were sentenced to die for their roles in killing Javad Marshall Fields and his fiancée, Vivian Wolfe, in 2005.
Javad Marshall Fields was a witness to another fatal shooting and was targeted because he was set to testify in that case.
Pending cases can still result in death penalty.
Polis didn’t have to commute the sentences of the death row inmates. Senate Bill 100 is not retroactive and thus doesn’t affect their cases.
He suggested last year that he would commute their sentences if the legislature sent him a bill repealing the death penalty.
The last person Colorado put to death was Gary Lee Davis, who was executed in 1997 for kidnapping, raping and murdering a woman.
Prosecutors in Arapahoe, Denver and El Paso counties have in recent years sought capital punishment in a handful of cases, but juries rejected their efforts. Not since June 2009, when Ray was sentenced, has a Colorado jury signed off on death.
There are multiple pending death penalty cases and potential death penalty cases in Colorado.
Those cases can still continue because Senate Bill 100 makes defendants ineligible for capital punishment only if they are charged on or after July 1, 2020.

Colorado Legislature Votes to Abolish Death Penalty. The Colorado legislature has sent to the Governor a bill that would prospectively abolish the state’s death penalty. On February 26, one day after a marathon 12-hour debate on the floor of the House, the Colorado House of Representatives voted 38-27 to pass SB 20-100 to repeal the state’s capital punishment statute. The Senate had previously approved the legislation on January 30. Governor Jared Polis has ten days to sign the bill into law or to veto it. The Governor has previously indicated that will sign. Upon signing, Colorado would become the 22nd state to abolish capital punishment, and the tenth since 2004.

The House Judiciary committee voted 6-3 on February 18 to approve SB 20-100, a bill that would prospectively repeal the death penalty in Colorado. The bill, which has already passed the state senate (see Jan. 30), is expected to receive a vote in the full House early in the week. Governor Jared Polis has indicated that he will sign the bill if it passes.