FINAL DECLARATION OF THE CAIRO WORKSHOP 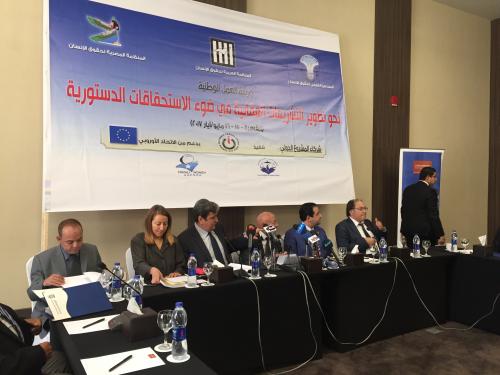 A national workshop on ‘ Development of punitive legislations in light of the constitutional entitlements’ was held in Cairo on 15-16 May 2017 through the initiative of the Arab Organization for Human Rights (AOHR) in partnership with the National Council for Human Rights (NCHR) and Egyptian Organization for Human Rights (EOHR). This relates to the activities of the international project on ‘Reduction of instances of death penalty, especially in the context of crises and combatting terrorism’ implemented by the AOHR in cooperation of Hands Off Cain (main partner), Arab Institute for Human Rights(AIHR) (Tunisia), and Somali Woman Agenda (SWA), with the support of the European Union. The project aims to reduce the aggravated penalties in the Arab region. The first phase shall target Tunisia, Egypt, and Somalia.

Some lawyers and human right activists from Kuwait, UAE, Jordan, and Syria, attended as “observers”, as well as representatives from the Italian and German embassies in Cairo.

The workshop addressed the following issues: an overview of the constitutional entitlements in the area of punitive legislations relative to the orientations and obligations, guarantees and measures; studies on the death penalty in the legislation and in practice, from the perspective of media and Islamic Law; measures and implementations to confront the current challenges, especially in the context of fighting terrorism; study of the social, economic, and psychological contexts related to the imprisonment and detention conditions in the punitive facilities as well as the conditions of the special segments during investigation and trial; and implementation of the penalty, across six sessions.

After two days of the in-depth detailed discussions, that covered the thematic and technical issues, through a dialogue that enjoyed freedom, scientific generosity, experience, and pursuit towards doable outputs that respond objectively to the basic needs and current challenges, the participants agreed on the following:

In light of the discussions, exchange of ideas, and consensus of opinion, the participants called for the following: