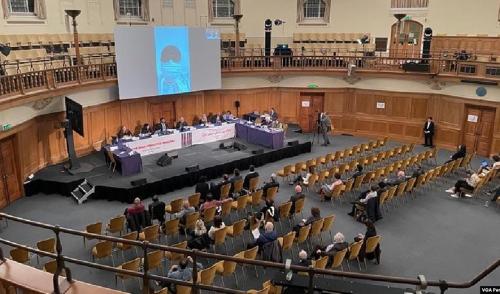 Five-Day International People’s Tribunal Heard Witness Testimonies of Use of Force and Torture, Invites Hundreds More to Testify.
Due to the widespread coverage of the Tribunal and the bravery of the survivors and victims, hundreds more have expressed interest in coming forward.
The Iran Atrocities Tribunal, also known as the Aban Tribunal, has adjourned after five days of heart wrenching testimonies told to the world by dozens of eyewitnesses, some speaking for the first time.
Over 30 witnesses participated in live verbal submissions before the esteemed panel of jurists for the Tribunal. The Panel, consisting of six lawyers, has examined over 100 written submissions, including witness statements, videos and graphic images of victims and survivors who have been murdered, tortured, and abused by the Iranian regime due to their participation in the November 2019 protests. Many more submissions aside from what has already been presented are still to be reviewed.
Due to the widespread coverage of the Tribunal and the bravery of the survivors and victims, hundreds more have expressed interest in coming forward and telling the international community of the injustices that they continue to face as a result of the gross human rights violations they endured during November 2019.
Queen’s Counsel, Wayne Jordash, Chair of the Tribunal Panel stated in his final statement that the Tribunal keeps the record open until the final judgement is announced in early 2022, asking all witnesses to come forward.
Eyewitnesses to scenes of heinous violence used against protesters and bystanders by security forces, including the Revolutionary Guard Corps (IRGC) and Special Unit Anti-Riot forces made up the majority of testimonies.
“We hope with what we have presented so far, that world governments will consider Magnitsky sanctions against the 133 people we have alleged to be perpetrators of these heinous crimes.” Hamid Sabi, a member of the Counsel, says.
“The victims and survivors of 2019 protests must have access to justice per existing UN Conventions.” Regina Paulose, Co-Counsel to the Tribunal, further emphasizes that states must utilize universal jurisdiction, as with cases like that of Hamid Noury.
Protests broke out across Iran on 15 November 2019 after authorities introduced a 200% hike in fuel prices overnight, without warning, impacting the country’s most vulnerable who depend on subsidised petrol to work and live. Government forces reportedly responded to the protests with extreme brutality and violence which led to the bloodiest crackdown of the past two decades.
“By holding the truth to the utmost importance, the honorable panel members have devised a safe space for relatives of the victims and protestors who are accused as ‘rioters’ and ‘terrorists’ by their own state, to stand tall and with pride to voice the truth to the world.  For the first time in an international fora, the real plaintiffs have accused the real perpetrators, demanding they are held accountable.” says Shadi Sadr, Executive Director of Justice for Iran and a co-organizer of Aban Tribunal.
The killing of protesters was deliberately concealed from the world through an ‘information blackout’, where, on the afternoon of 16 November 2019, the Iranian government implemented a near-total shutdown of the internet which lasted for a few weeks in some parts of the country. The resulting ‘information blackout’ may have allowed the police, security, and military forces to commit murder while the international community’s access to Iran was almost completely cut off.
“By amplifying the voices of the victims and their families, the Tribunal has given hope to millions of Iranians that their voices have been heard globally. In the short term, the public will realise they are not powerless, and the authorities will show restraint next time protesters take to the street; in the long term, the Tribunal will bring victims a step closer to justice and accountability.” says Mahmood Amiry-Moghaddam, Executive Director of Iran Human Rights and a co-organizer of Aban Tribunal.
The Aban Tribunal was created in response to the cries of victims and survivors of the nationwide November 2019 protest crackdowns by three NGOs, Justice for Iran, Iran Human Rights and Together Against Death Penalty. Its final judgement is expected in early 2022.
Those interested in submitting evidence or participating in future hearings can contact the Tribunal on social media: Twitter, Instagram and WhatsApp. About the Aban Tribunal see also HoC 14/11/2020.