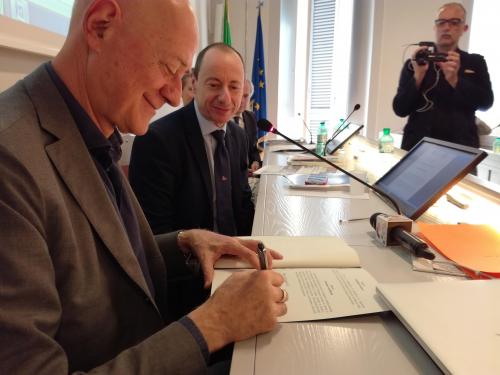 Given that Hands Off Cain is the coordinating organization for the project “Containing the death penalty at times of war on terrorism in Egypt, Somalia and Tunisia”, approved by the European Commission (ENI/2016/376-926) for a duration of three years (2017-2019);

Considering that both parties share the general objective of the project to reduce recourse to the death penalty in Egypt, Somalia and Tunisia, starting from the containment of such recourse to the limits set by existing international standards which States are obliged to adhere to, to arrive at the introduction of a moratorium on executions in view of the abolition of the death penalty, as set forth by the United Nations General Assembly;

Acknowledging that the project is taking place in the particular historical context of “war on terrorism”, in which the logic of emergency and security laws risk compromising the protection of human rights and the Rule of Law, with arbitrary, illegal and discriminatory use of the death penalty as a result in violation of the founding principles of the international community (in primis the non-derogative principles of legality – art. 11 Universal Declaration of Human Rights and art. 15 ICCPR -; of limiting the death penalty to the “gravest crimes” – art. 6 n. 2 ICCPR, meaning blood crimes –; and the principles of fair trial – art. 14 ICCPR);

Given that lawyers play an essential role in the promotion of a dialogue based on solid legal arguments between all stakeholders, exactly at times of important challenges to the Rule of Law and human rights. Moreover, lawyers are key to identifying and working with critical death penalty cases, be it in the trial stage or the execution stage, before national, regional and international tribunals and bodies;

THE PARTIES HAVE AGREED   Art. 1 Aim

With the present Memorandum of Understanding, the parties will work together on initiatives to promote:

To achieve the aims set out under Art. 1, in the present Memorandum the parties identify the operational terms and programme for the realization of the following common objectives:

The Parties commit to actively share data, documents, information, studies and research in order to achieve close cooperation on the objectives set out in this Memorandum, and in particular with regard to the respect for fundamental human rights, the administration of justice and fair trial in particular, and conditions of detention with particular attention for those condemned to the death penalty.

Parties will make use of their own offices and organizational structure for the implementation of the aims and objectives set out in this Memorandum, as well as for the verification and monitoring of activities.

The Parties commit to guaranteeing maximum dissemination of the contents of the present Memorandum and the following initiatives in all Institutional activities.

The duration of this Memorandum is the one foreseen for the implementation of the project “Containing the death penalty in times of war on terrorism in Egypt, Somalia and Tunisia”, approved by the European Commissione (ENI/2016/376-926) for a duration of three years (2017-2019) and, upon agreement by Parties, can be modified at any time.