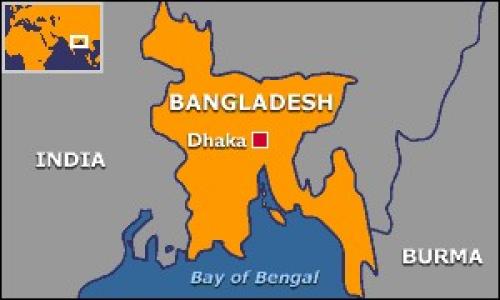 a court in Bangladesh sentenced 21 people to death in connection with a wave of coordinated bombings on August 17, 2005. The 21 were convicted of setting off six bombs across western Jhenidah district. The blasts were among 500 nationwide. No one died in Jhenidah, but three people were killed elsewhere. All 21 were members of the banned Islamic militant group Jamaat-ul Mujahideen Bangladesh (JMB).
This was the first verdict to be given in connection with the August serial bombings, which occurred in all but one of Bangladesh's 64 districts in the space of an hour.
As well as those who died, about 100 people were injured. More than 100 cases had been filed against members of the JMB, which the authorities blamed for the bombings.
The special tribunal judge in Jhenidah, Ansur Rahman Khan, delivered his verdict in a high security courthouse where 18 of those convicted were present. Three others were sentenced in absentia.
Judge Khan said he had given the 21 accused the maximum sentence on the basis of circumstantial evidence, and that there was no concrete evidence against them.
In another case, a court in north-eastern Sylhet sentenced a man to death for a bomb attack which wounded a judge. The man was accused by officials of being a JMB activist. Earlier in the month, the JMB's top leaders, Shaykh Abdur Rahman and Siddiqul Islam, alias Bangla Bhai, were sentenced in absentia to 40 years in prison for a bomb attack which killed two judges last November.