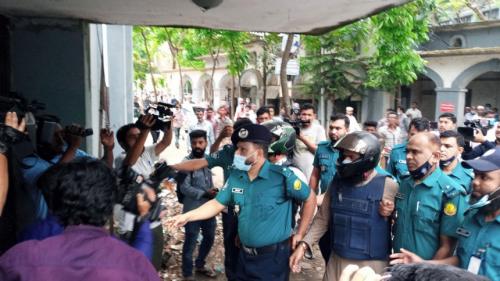 Four persons on 30 March 2022 were sentenced to death in Bangladesh for killing writer and blogger Ananta Bijoy Das of Sylhet in May 2015.
Ananta Bijoy Das, whose writing was critical against Islam and other organised religions, was hacked to death by a group of masked men.
The condemned convicts are Abul Khaer Rashid Ahmed, Abul Hossain alias Abul Hussain, Harunur Rashid and Faisal Ahmed.
Sylhet Anti-Terrorism Special Tribunal's judge Nurul Amin Biplob also acquitted Shafiur Rahman Farabi as allegations brought against him was not proven.
Earlier around 12:30pm, Farabi and Abul Khaer, now in jail custody, were produced before the court while the rest are on the run.
Ananta was killed on 12 May 2015 near his Subidbazar residence of Sylhet when he was on his way to work along with his sister.
Banned militant outfit Ansarullah Bangla Team (ABT) claimed responsibility for the murder.
Ananta's brother Ratneswar Das filed a murder case accusing some unnamed persons with the Sylhet's Airport Police Station the next day, and the investigation was later handed over to the Criminal Investigation Department (CID).
On 18 October 2016, Arman Ali, inspector of CID and investigation officer of the case, pressed the charge sheet but the court rejected it and ordered CID to reinvestigate the case and file a supplementary charge sheet, which was later filed on May 2017.
Another charge-sheeted accused, Mannan Yahya, the lone accused who confessed to the murder before the court, died on 2 November 2017 after he fell ill at Dhaka Central Jail.