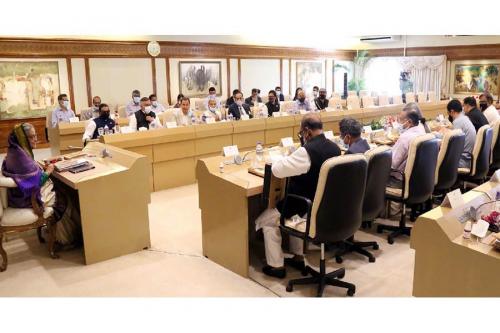 The Cabinet on 28 March 2022 approved the draft of 'Ansar Battalion Act, 2022' keeping death penalty as the maximum punishment for serious offences like attempt to revolt, participation or provocation in such conspiracy.
The Ansar Battalion is a paramilitary auxiliary force responsible for the preservation of internal security and law enforcement in Bangladesh.
The approval came at the regular cabinet meeting with Prime Minister Sheikh Hasina in the chair at her office, reports UNB.
"If anyone tries to revolt, instigates or participates in conspiracy, the member would face death penalty or life sentence or minimum five-year jail," said Cabinet Secretary Khandkar Anwarul Islam at a press briefing at Bangladesh Secretariat.
As per the draft law, there will be two separate courts - Summary Ansar Battalion Court and Special Ansar Battalion Court - to try two types of offences committed by any member, he said.
The summary court will try general crimes and misconduct, while the special court will try serious crimes, he said, adding that there will also be an Ansar Battalion Appeal Tribunal under the proposed law.
The cabinet secretary said the maximum punishment for general crimes would be three-year jail term.
According to the draft, a member of the Ansar Battalion can't be a member of any political or non-political organisation.