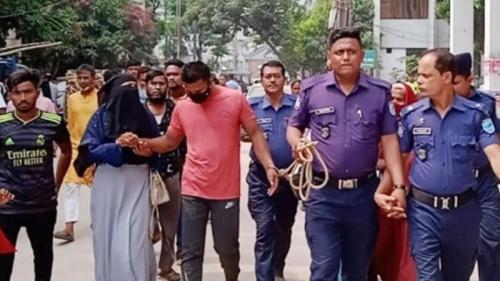 A court in Bangladesh on 18 October 2022 sentenced four people to death in the case of strangulation of a girl after rape in Narayanganj. Meanwhile, one person has been sentenced to life and one person has been acquitted.
Judge Nazmul Haque Shyamal of the Women and Child Abuse Prevention Tribunal gave the order.
Those sentenced to death are - Kamrul Hasan, Rabiul Islam, Shukkur Ali and Ali Akbar.
On the other hand, Dolly Begum was sentenced to life and Nasreen Begum was acquitted.
Among them, Rabiul Islam and Dolly Begum are absconding.
Public Prosecutor (PP) Rakib Uddin Ahmed said that the accused killed the girl after calling her to uncle's function. Later, a case was filed in this incident.
The court announced the verdict based on the testimony of 17 people.
Md. Saidul Islam Sumon, lawyer for the plaintiff, said that on 2 May 2005, the 6th grade student went to Lakshinagar village of Fupur village from her house in Char Rajapur village of Fatulla. The next day she went missing.
On 4 May, the police recovered her body from a field in Lakshinagar village.
The police first arrested and interrogated Dolly Begum. Then Dolly told the police that the girl was killed after being raped. At the same time she revealed the identity of the killers.