BANGLADESH: NINE SENTENCED TO DEATH IN NAOGAON FOR TRIPLE MURDER 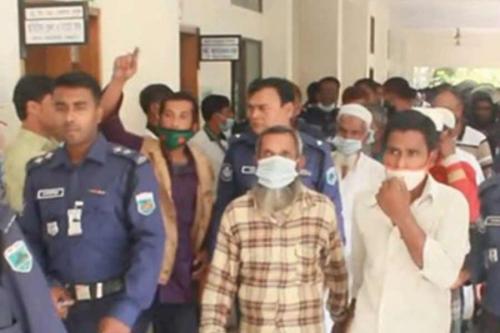 The Naogaon Additional District and Sessions Judge Court on 14 March 2022 sentenced nine people to death and another to life term imprisonment for murdering three people in Badalgachhi upazila in the district in 2014.
Judge Hasan Mahmudul Islam of the court handed down the punishment.
The death sentence recipients are Md Saidul Islam, Aizul Haque, Jalal Hossain, Helal Hossain, Belal Hossain, Md Zayed, Abul Hossain, Md Mostafa and Md Sohag Ali.
The life term imprisonment recipient is Md Hashem Ali.
All the convicts are residents of Ujalpur village under Badalgacchi upazila.
According to the prosecution, the convicts killed Md Shahidul Islam Dulu, Md Amjad Hossain and Abdul Wadud over land dispute on 6 June 2014.
Later, Farhad Hossain, son of the deceased Md Shahidul Islam, filed a case with the local police station in this connection.
After examining records and hearing witnesses, the court delivered the verdict and acquitted ten others as allegations brought against them was not proved.