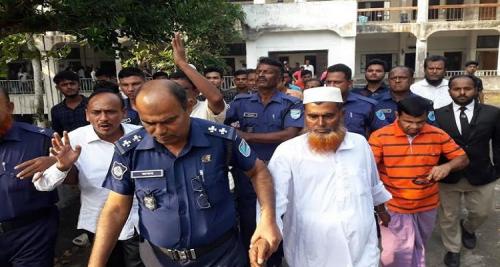 A court in Madaripur on 19 October 2022 sentenced three people to death and six others to life imprisonment for killing a trader at Sadar upazila in the district in 2003.
Madaripur Additional District and Sessions Judge Lailatul Ferdous handed down the verdict in the afternoon.
The condemned convicts are Mazharul Islam Manju, 50, Jasim Sheikh, 45, and Masim Sheikh, 48, residents of Shirkhara village in the upazila.
And the lifers are Hossain Hawlader, 60, Manjur Ali, 56, Saidur Hossain Hawlader, 52, Surja Matubbar, 55, Foez Sheik, 58, and Sujal Matubbar, 60.
The court also fined the convicts Tk 50,000 each.
Siddiqur Rahman, public prosecutor of the court, confirmed the matter.
According to the prosecution, trader Razzaque Hawlader, brother of Shirkhara UP chairman Mojibur Rahman Hawlader, was shot dead in a broad daylight by political rivals at Rajarhat Bazar on 19 October 2003, over a UP election.
A case was filed by the victim's wife Selina Khanam with Madaripur Sadar Police Station on 20 October accusing 20 people.
Police submitted a charge-sheet against 19 people to the court on 3 November 2005, after an investigation.