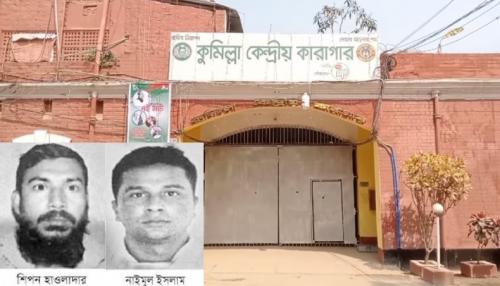 Two convicted of the 2003 murder of Chattogram Railway official and freedom fighter Shafiuddin Ahmed, were executed at Cumilla Central Jail on 8 March 2022 night.
Senior jail superintendent Shahjahan Ahmed said that Shipon Hawladar, son of late Younus Hawladar, and Naimul Islam, son of late Edun Mia Sarkar, both residents of Chattogram, were hanged at 11:30pm.
Chattogram deputy commissioner Mohammad Kamrul Hasan, police superintendent Farooq Ahmed and civil surgeon Mir Mubarak Hossain were present during the execution.
All the mandatory legal procedures, including the post-mortem examinations of the bodies, were completed after the execution, Shahjahan said. ‘Later, the bodies were sent to their homes by the jail authorities.’
On 14 June 2003, Shafiuddin was shot dead at his home in North Ambagan Railway Quarters of Khulshi in Chattogram.
Based on a complaint from Mahmuda Begum, the wife of the victim, an FIR was filed by the police against 13 people.
On 25 November 2004, the Chittagong Divisional Speedy Trial Tribunal sentenced Shipon and Naimul to death, and seven to life imprisonment.
The four other accused in the case were, however, acquitted due to lack of evidence.