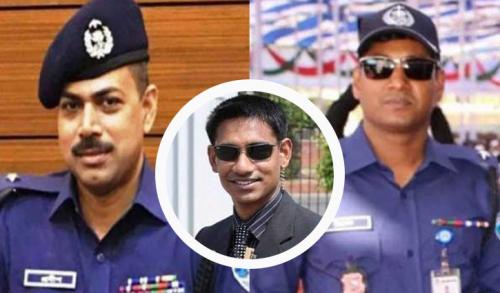 A Bangladeshi court on 31 January 2022 handed down the death penalty to two policemen and life term to seven other officers on charges of killing an ex-army major in a “pre-planned” attack in Cox’s Bazar, a sea-side resort town, in 2020.
“They shall be hanged by neck until they are dead,” a prosecution lawyer quoted Cox’s Bazar Sessions Judge Mohammad Ismail as pronouncing the sentence for murdering Major (retd) Sinha Mohammad Rashed.
Hundreds of people, including alleged police atrocity victims, waited for hours outside the heavily guarded Sessions Court Complex as the judge read out the 300-page verdict, eventually condemning inspector and coastal Teknaf Police Station In-Charge Prodip Kumar Dash and Inspector Liakat Ali to death.
According to the prosecution, Liakat Ali shot Rashed four times on the night of 31 July 2020 at a police check post in Cox’s Bazar Teknaf Marine Driveway after being instigated by Dash, who minutes later appeared at the scene and pressed his boot on Sinha’s neck who as per reports lay on the street for one and a quarter hours before dying.
Investigators and prosecutors alleged four bullets were shot within five minutes without any provocation as Rashed had come out of his car with a surrender gesture as was ordered to him.
Prosecutors said Ali responded in filthy language when Rashed begged for water, until Dash came to the scene and ordered the body to be sent to a hospital after his death was confirmed.
Rashed previously served in the elite Special Security Force (SSF) – meant to protect VVIPs including Prime Minister Sheikh Hasina. He had taken voluntary retirement and was working as a travel documentary maker, staying in Cox’s Bazar for months with a television crew.
“We are happy as the two main killers were condemned to death,” a key-prosecution lawyer said.
He said before Rashed was finally shot down, efforts were made to assassinate his personal character as a drug addict and later ploys were made to lynch him as a dacoit instigating ordinary people.
The law said seven of the total 15 accused were acquitted but they are not completely innocent and “we will challenge their acquittal in the higher court”.
The court found Dash as the “mastermind” of the killing as Rashed questioned his atrocities on innocent people on the plea of particularly investigating drug peddling cases as 65 witnesses testified before the trial court.
The protestors outside, mostly residents of Cox’s Bazar and adjacent areas, distributed sweets after the verdict saying Dash used to blackmail them and killed many in the name of “crossfire” as they failed to bribe him as demanded or even after giving him money.
“We are happy as the two main culprits were given capital punishments … others who were acquitted too had some responsibilities and we hope they will be punished in the subsequent trial process in the appeal stage,” Rashed’s older sister Sharmin Shahria told newsmen at the scene.