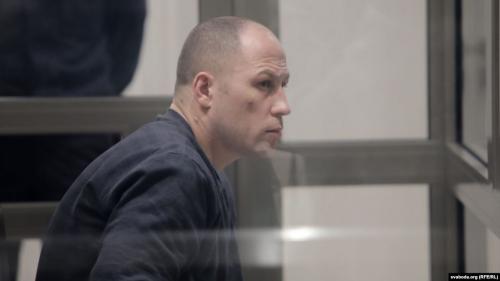 The Belarusian Supreme Court has upheld a death sentence for a man convicted of murdering two women, despite calls from the European Union for Minsk bring an end to capital punishment.
The court pronounced its decision in the case against Alyaksandr Asipovich on 14 May 2019.
Human rights activist Andrey Paluda, who coordinates the Rights Defenders against Capital Punishment campaign, told RFE/RL that Asipovich had a right to appeal the court's decision at the United Nations' Human Rights Committee.
Paluda maintains that Asipovich's right to a fair trial was violated.
Under Belarusian law, Asipovich has 10 days to file a request for clemency from President Alyaksandr Lukashenka.
Asipovich's mother told RFE/RL that her son planned to request clemency.
The 36-year-old Asipovich has previous convictions for theft, robbery, hooliganism, and inflicting bodily harm.
He was convicted and sentenced to death on 9 January 2019 for the murders in 2018 of two women in the eastern city of Babruysk.