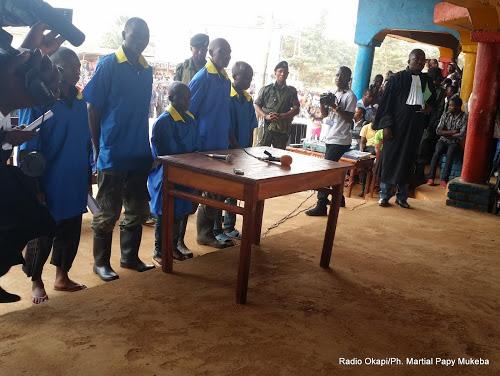 10 January 2018: the military Court of North Kivu, sitting in the fair room in Beni, condemned Ugandan rebels of the ADF and their collaborators to sentences which vary between two years of penal servitude to the death penalty. The death penalty, was inflicted on the warlord David Mbusa Maranatha, leader of the Mayi-Mayi body of Christ movement. This movement occupied Mount Carmel in the town of Butembo and Mount Sehe in Kabasha, in the territory of Beni. Also Also Oscar Lusenge Kihundu, a member of the Mai-Mai militia Mazembe, was sentenced to death following his participation in the attack on a position of the eco-guards of the ICCN in Tshanika in March 2016, with multiple abuses against shipowners on Lake Edward and the Planning attacks against army positions.
The military court sentenced them to participate in a insurrectional movement, a criminal association, terrorism, illegal possession of weapons and war ammunition and voluntary injury. The judgments of this exceptional court are not subject to appeal.
(Source: 10/1/2018, Radiookapi.net)