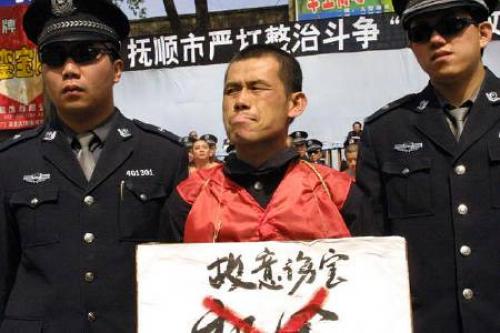 A prisoner is shown being led to his execution, April 2002

China executed 10 people for crimes ranging from rape to drug trafficking in an apparent attempt to discourage people from committing crimes during the upcoming Labor Day holiday.
Authorities carried out the executions by lethal injection in several provinces.
In northwest China's Lanzhou city, Gansu province, at least seven people were executed, including three who made national headlines in a prostitute-slaying case, according to the Lanzhou Morning Post.
The three men had killed 11 prostitutes, eaten their liver and kidney and used sulphuric acid to dissolve their bodies after robbing them in 2003 in Lanzhou and other provinces, the report said.
Another man executed was the leader of a group that carried out 20 kidnappings and robberies.
A woman who could not become pregnant and killed a nurse she blamed for her infertility was also executed.
A homosexual man who murdered his partner was also put to death.
In southern China's Haikou city on Hainan island, two people were executed for robbing and killing a taxi driver, the Hainan News Website said.
And in northeast China's Fuxin city, Liaoning province, a martial arts teacher at a public school was executed for raping nine young female students from 2003 to 2005, the Huashang Morning Post said. Reports of executions typically increase before public holidays, such as the three annual weeklong holidays -- Spring Festival, May 1 Labor Day week, and October 1 National Day holiday.