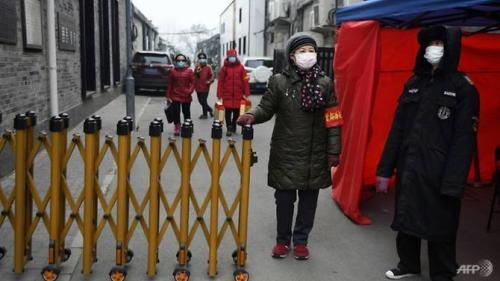 A Chinese court on 1st March 2020 sentenced a man to death for fatally stabbing two officials at a checkpoint set up to control the spread of the new coronavirus outbreak.
The virus has infected more than 80,000 people and killed nearly 3,000 in mainland China -- prompting a wide network of temperature checks, travel restrictions, residential checks and closures nationwide.
Many villages and communities have also implemented their own blockades and tough measures to keep people out, fearful that travellers could infect their communities.
The court handed down a death sentence to a 23-year-old man after he stabbed two officials at one local village checkpoint.
The incident happened on 6 February when Ma Jianguo was driving a minivan through a checkpoint at Luo Meng village in Honghe, southwestern Yunnan province, where he was stopped.
After Ma refused to cooperate with officials, his passenger began trying to remove the roadblock, the court said, and the local official started filming Ma and the other man on his mobile phone.
A furious Ma stabbed the official in the chest and abdomen with a knife he carried with him and then attacked another official who came to the victim's aid.
The two men died from their wounds.
The court statement said that although Ma had "voluntarily surrendered and truthfully confessed", the killings were "extremely vicious".