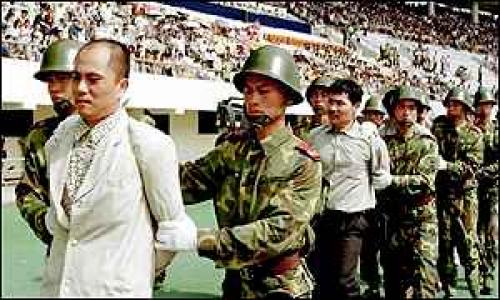 Chinese prisoners are led to execution by soldiers

two Taiwanese nationals convicted of drug trafficking were executed in southern China's Guangdong province after being convicted of possessing 12 kilograms (26.4 pounds) of the methamphetamine ice.
The executions took place in the city of Zhuhai immediately after the Guangdong High Court reviewed the case and issued the execution order.
The pair were only identified by their surnames, Huang and Lin.
They had been arrested in March 2002 after arranging the sale of three kilograms of ice, also known as methamphetamine, to two other traffickers who intended to distribute the drug in Taiwan.