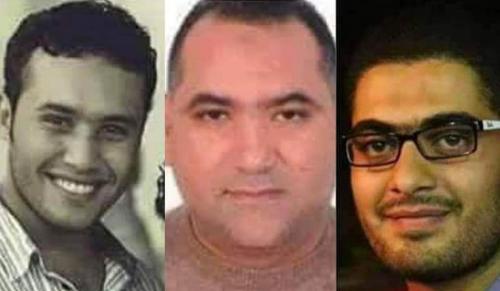 From left, Hindawi, Metwalli and Ghanem

Egyptian authorities executed three political prisoners on 7 February 2019, one year after they were sentenced to death on charges of killing the son of a judge, according to local rights activists.
An Egyptian rights activist who knew the three men said they were all members of the Muslim Brotherhood and had taken part in protests opposing the military coup led by President Abdel Fattah el-Sisi against his predecessor Mohamed Morsi, who hailed from the group.
The three men were university students Ahmed Maher Hindawi and Almotaz Ghanem, and IT company owner Abdel Hamid Metwalli.
The case, known in Egyptian media as “The son of the judge”, dates back to September 2014, when masked gunmen shot dead Mohamed el-Morelli, the 26-year-old son of the vice president of the Cairo appeals court, Judge Mahmoud el-Morelli, in the Nile Delta city of Mansoura.
Following the murder, security forces rounded up a number of young men from Mansoura, three of whom were later sentenced to death after confessing - reportedly under torture - that they had committed the crime.