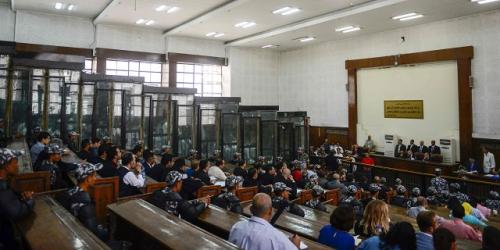 An Egyptian court sentenced to death 75 extremists, including Muslim Brotherhood leaders, and referred what was the largest single case of capital punishment convictions to the country’s top religious authority.
Egyptian law requires the grand mufti to be consulted on death sentence cases, although his opinion is not legally binding and those convicted still have the right to appeal.
Those found guilty were among 713 defendants on trial for killing policemen and vandalising property during 2013 clashes between security forces and supporters of ousted president Mohamed Morsi.
Senior Brotherhood members Mohamed el-Baltagui, Issam al-Aryan and Safwat Hijazi were in the dock, while 31 others were tried in absentia.
Also on trial was prominent photojournalist Mahmud Abu Zeid, widely known as Shawkan, who in May received UNESCO’s Press Freedom Prize. The court postponed a verdict on his and other cases.