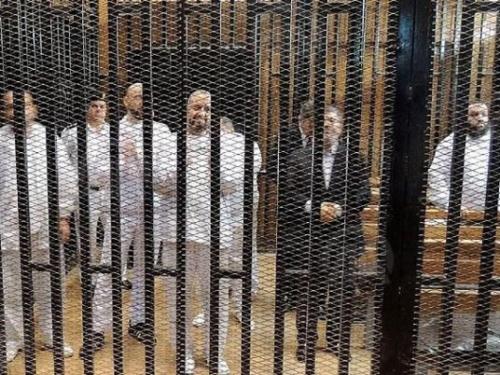 A court in Cairo on 28 June 2022 sentenced 10 people to death and 56 others to life imprisonment in a mass trial of the case against the Helwan Brigades, whose members have been accused of committing violent acts in Egypt.The First Terrorism Circuit of the Cairo Criminal Court held a hearing at the Tora Police Institute, where it rulings to a total of 215 defendants in the same case.
The mass trial is connected to events that took place between August 2013 and February 2015 - a period that saw a rise in attacks, particularly targeting security forces, following the military coup against Egypt's democratically-elected president Mohamed Morsi.
The court sentenced seven defendants in attendance to death. However, these case files have to be approved by the grand mufti before the executions are carried out.
Those defendants present were Magdy Mohamed Ibrahim, Mahmoud Attia Ahmed Abdel Ghani, Abdel Wahab Mustafa, Musab Abdel Hamid Khalifa, Abdullah Nader, Abdel Rahman Issa, and Mahmoud Al Sayed Amin.
The other three defendants, Yahya al-Sayyid Ibrahim Musa, Mahmoud Abu Hasiba, and Muhammad Ibrahim Hamid, were sentenced in absentia.
In the summer of 2014, a group known as the Helwan Brigades issued a video manifesto on social media expressing their dismay at the "peacefulness of the Muslim Brotherhood" in dealing with Egypt's Ministry of Interior, just as the military had ousted Morsi.
The group warned authorities that they "did not want to carry arms, but you are the ones who forced us to resort to it to defend ourselves, to defend our women, to defend this land".
The charges against them included participation in terrorist acts, vandalising a vehicle for the Helwan Police Station, sabotaging the Helwan Traffic Unit building, the killing of several police officers, the possession of explosives, and detonation of an explosive device in al-Basha Cafe in Helwan.
In a statement, the Committee for Justice (CFJ) human rights group said that some of the defendants in the Helwan Brigades case have been "subjected to psychological and physical torture".
It added that "66 defendants had proven that they had been subjected to enforced disappearance and incommunicado detention from the moment of their arrest until the date of their presentation to the Public Prosecution."
On 28 June, judges also ordered five defendants to pay $1.76m in fines as compensation for "sabotaging public properties and facilities, especially towers and power transformers".
Another 63 people were sentenced to 15 years in prison each, including the photojournalists Khaled Mohamed Sahloub and Alia Nasreddin Awad.
The court also sentenced 35 other defendants to 10 years in jail and acquitted 43. Eight cases were terminated due to the death of the defendants. CFJ said that 35 defendants were prosecuted without a lawyer.
According to CFJ, the court indicted the defendants over founding and leading an illegal group between 14 August 2013 and 2 February 2015 in the Cairo and Giza governorates.
The court said on 28 June that the goal of the Helwan Brigades was "the suspension of the constitution and laws, to prevent state institutions and public authorities from exercising their functions, to attack the personal freedom of citizens, and the public liberties and rights guaranteed by the constitution and the law, and to harm national unity and social peace."Following the release of the group's video in 2014, security forces launched a mass arrest campaign, detaining almost 150 people.