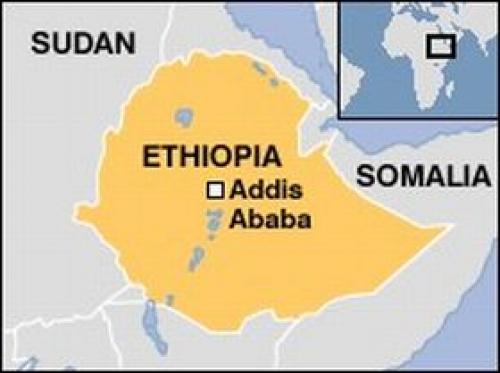 Ethiopian Prime Minister Meles Zenawi said that jailed opposition leaders accused of fomenting a coup after disputed elections in 2005 will be tried despite appeals for their release. In a speech to parliament, the prime minister said conspiracy and treason charges would not be dropped for a group of 131 opposition figures, journalists and aid workers who had been detained since November and risked being sentenced to death if found guilty . "Interfering in the natural process of the rule of law and releasing those violent leaders would only prove to them that they can get away with anything," he said.
"It would give them the green light to do whatever they wish, assuring a situation where they will pursue their goal of dismantling the constitutional order by any means possible," Meles said.
He rejected calls for leniency to be shown to the group, which included nearly the entire leadership of the main opposition Coalition for Unity and Democracy (CUD), and said their release would accomplish nothing.
"This will by no means bring about stability," Meles said. "This is the reason why the government is determined to stand up to any pressure and to make the leaders of the CUD legally accountable."
The CUD claimed the May 15 elections were rigged by Meles' ruling Ethiopian People's Revolutionary Democratic Front (EPRDF) and called for public protests against the alleged fraud to demand new elections.
Demonstrations turned violent in June and November when police opened fire on unruly crowds in Addis Ababa and other towns during the protests, killing at least 84 people.
Meles had accused the opposition of trying to overthrow his government, which had been in power since 1991, but had come under fire for the prosecution of the CUD leaders who were next due to appear in court on February 23.