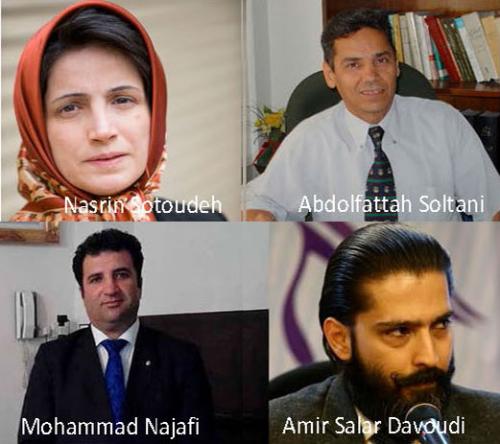 The Council of Bars and Law Societies of Europe (CCBE) on 28 November 2019, announced that its human rights award for 2019 goes to the four Iranian lawyers Abdolfattah Soltani, Amirsalar Davoudi, Mohammad Najafi and Nasrin Sotoudeh.
Lawyers Nasrin Sotudeh, Mohammad Najafi and Amirsalar Davoudi are imprisoned in Iran solely for expressing their opinion and for defending their clients, including civil activists, human rights defenders and ethnic minorities. Lawyer Abdolfattah Soltani was released from prison last year after almost a decade of imprisonment.
“I am delighted to inform you that you have been selected as the winners of the CCBE Human Rights Award 2019 for your outstanding and tireless commitment in favour of human rights in Iran.  The CCBE believes that your courage, determination and commitment to defending human rights in Iran - where all forms of opposition, be it ideological or political, are not tolerated - deserve the recognition of the European legal profession,” says a statement by CCBE president José De Freitas .
Nasrin Sotoudeh: 38 years in prison and 148 lashes Nasrin Sotoudeh is an eminent Iranian lawyer, who has dedicated her career to defending women and children who are victims of domestic violence, but also to defending several Iranian activists and journalists. She has also defended young people sentenced to death for committing acts while they were minors, women who had been victims of acid attacks, as well as religious minorities. Since 2016, she has been defending women who were pursued by the courts and the police for refusing to wear the hijab. The authorities arrested her again in June 2018 for defending protesters against the mandatory use of the veil.
Abdolfattah Soltani: 10 years in prison Abdolfattah Soltani is a lawyer and one of the cofounders of the Centre for Human Rights Defenders. He has been in detention since 2011. He has spent most of his career as a lawyer defending political prisoners. His health status is very worrying as he suffers from severe heart disorders. Since 2016, no leave has been granted to him.
Mohammad Najafi: 19 years in prison and 74 lashes Mohammad Najafi is a lawyer who has been particularly active in the defence of Iranian political prisoners. The repression he has been suffering has recently increased. He has been repeatedly convicted for "disturbing the State", "publishing lies", "collaborating with enemy states through conveying information in interviews", "propaganda against the regime" and "insulting the Supreme Leader", "publishing lies on the Internet (...) with the intention of disturbing public opinion".
Amir Salar Davoudi: 30 years in prison, 111 lashes. Amir Salar Davoudi is an Iranian lawyer who has defended many political prisoners and members of religious or ethnic minorities. He is very active on social networks. He was arrested on 20 November 2018. He was convicted on multiple charges: "insulting the authorities", "insulting the Supreme Leader", "propaganda against the regime", "forming a group to undermine national security".
The Council of European Bars (CCBE) represents the Bars and Law Societies of 45 countries, and through them more than one million European lawyers. It was founded in 1960, it is an international non-profit association which has been, since its creation, at the forefront of advancing the views of European lawyers and defending the legal principles upon which democracy and the rule of law are based.
Iran Human Rights (IHR) congratulates the four Iranian lawyers for the award, and calls for the release of all imprisoned lawyers and an end to the persecution and harassment of the independent lawyers in Iran.
IHR director, Mahmood Amiry-Moghaddam, said: “Iranian human rights lawyer are in the frontline of combatting the violation of human rights by the Islamic Republic. They have been subjected to severe repression in recent years. We hope the CCBE award leads to more international solidarity with the Iranian people who are struggling for their most fundamental rights.”
(Source: IHR, CCBE.eu)