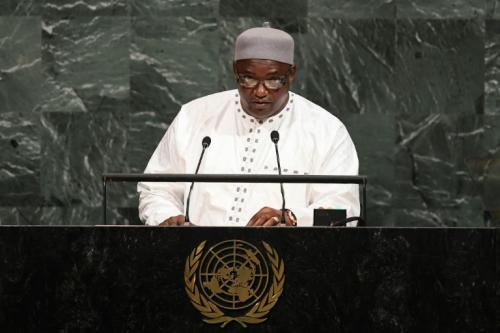 Gambian President Adama Barrow announced a suspension of the death penalty in his country, in a break from the former regime of the dictator Yahya Jammeh.
Barrow, a onetime security guard in London who was elected president in December 2016, signed a UN treaty on the abolition of capital punishment last year.
“I will use this opportunity to declare a moratorium on the use of the death penalty in the Gambia, as a first step towards abolition,” Barrow said in a speech marking the 53rd anniversary of independence from Britain.
Jammeh ruled Gambia, a small English-speaking country surrounded by Senegal and a narrow Atlantic coastline, with an iron fist for 22 years.
The death penalty was last used under Jammeh in 2012, when nine soldiers were executed by firing squad.
Jammeh later threatened to expand a list of capital crimes in response to what he said was a rising crime rate.
Barrow said on February 18: “We have won the war against dictatorship, which is the easy part. Maintaining the peace for our democracy to thrive will be our utmost challenge.”
He added that “mistakes will be made, but we will correct them as we work towards perfecting the New Gambia.”