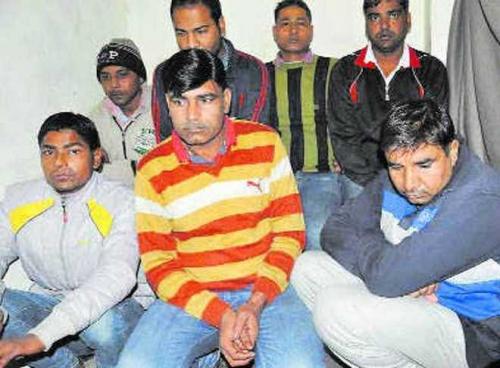 The seven accused in the 2015 gangrape and murder case

The Supreme Court on 4 July 2019 stayed the execution of death penalty awarded to seven men convicted of raping and murdering a mentally-challenged woman in Rohtak in 2015.
Staying the execution of convicts Rajesh, Pawan, Sunil (aka Mada), Padam, Sarwar, Manbir and Sunil (aka Sheela), a Bench of Chief Justice of India Ranjan Gogoi and Justice Deepak Gupta also admitted their appeals against the Punjab and Haryana High Court’s 19 March verdict upholding the trial court’s decision to award them capital punishment.
The convicts contended that neither the trial court nor the High Court made any individual assessment of the mitigating circumstances in favour of each of the accused. The courts below simply went by the brutal nature of the crime, said senior advocate Vibha Datta Makhija, who represented the convicts in the SC.
The 27-year-old victim, from Nepal, was residing with her sister in Rohtak. Acting on a tip-off, the police had arrested Padam, who spilled the beans during interrogation, leading to arrest of other six accused.
The trial court had in December 2015 sentenced them to be “hanged by the neck till they are dead”.