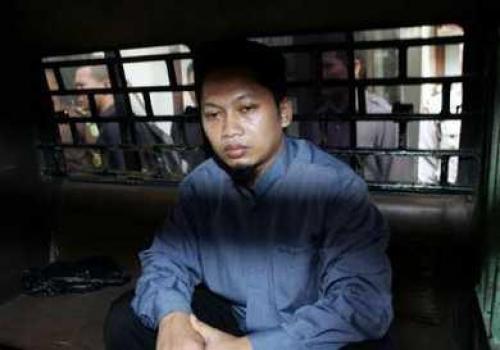 an Indonesian court sentenced a second Islamic militant to death for helping plot and carry out last year's suicide car bomb attack outside the Australian embassy in Jakarta.
The court said it found Ahmad Hasan guilty of helping build the one-tonne bomb with Malaysian fugitive Azahari bin Husin, a senior militant linked to al Qaeda and the alleged mastermind of the attack that killed 10 Indonesians.
The same court on September 13 sentenced to death the leading defendant in custody over the attack, a militant called Rois but also known as Iwan Dharmawan.
Hasan, 34, showed no reaction when the verdict was handed down but once out of the courtroom he shouted "Allahu Akbar" (God is greatest) three times as he was led away. "Of course, I don't accept this," Hasan told reporters.
"This is an evil court. It's all lies and there has been intervention here."
Achmad Sobari, presiding judge on the three-member bench, said Hasan drove the bomb-laden car close to the embassy, before handing it over to the suicide driver.
"The defendant has been proven guilty of involvement in the planning of a terrorist act," Sobari said.
The court has jailed three other men for terms of up to seven years over the car bomb, which tore through the blast-proof fence of the fortified Australian mission.
It said the attack cost $10,000 and was financed by Osama bin Laden, the Saudi-born leader of al Qaeda, in response to Australia's support of American policies in the Muslim world.
Azahari and another Malaysian, Noordin M. Top, who is also on the run, are key members of Jemaah Islamiah, a shadowy Southeast Asian network seen as the regional arm of al Qaeda.
Judge Sobari said Hasan helped both men hide after the attack.