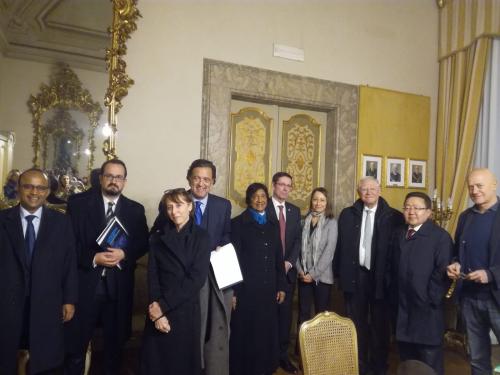 On the day of the vote of the UN General Assembly on the Resolution for the moratorium on capital punishment, the International Commission against the Death Penalty went to Italy where it met Pope Francis and Hands Off Cain. The Commission, led by Navy Pillay, included Bill Richardson, former Governor of New Mexico and Elbegdorj Tsakhia, former president of Mongolia, both awarded by Hands Off Cain with the “Abolitionist of the Year” award. There was a strong appeal for the moratorium and the abolition of the death penalty. Pope Francis, in his speech to the Commission, said that the death penalty is "in itself, contrary to the Gospel, because a decision is voluntarily made to suppress a human life, which is always sacred in the eyes of the Creator and of whom only God can be the true judge and guarantor". The Pope has defended his new formulation of the catechism, remembering that in the past even "the Papal State has resorted to this inhuman form of punishment".