IRAN - A woman, Somayyeh Shahbazi Jahrouii, was hanged in Sepidar Prison on December 4. 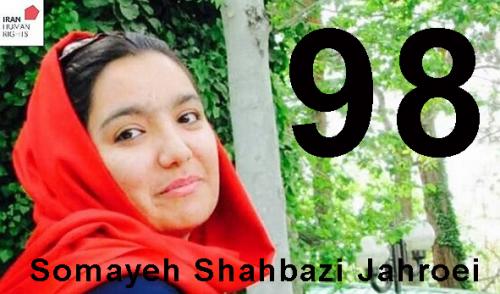 A woman, Somayyeh Shahbazi Jahrouii (Somayeh Shahbazi Jahroei), was hanged in Sepidar Prison on December 4. In the morning of Wednesday, December 4, 2019, Somayyeh Shahbazi Jahrouii, 33, was hanged in Sepidar Prison of Ahvaz, capital of Khuzestan Province. In an interview yesterday, one of Somayeh's relatives said: "the murder victim had tried to rape Somayeh. When the man died, Somayeh was scared and took the body out of the town and set it on fire". The relative continued:" The murder victim's family had at first asked for 10 billion Toman (about one million dollars) blood money. However, they later agreed on 5 billion Toman and they were going to give us a few month's deadline. However, the Head of the prison called today and informed us that Somayeh will be hanged at 07:30 tomorrow morning." Somayyeh Shahbazi Jahrouii is the 98th woman to be hanged and executed during Rouhani’s tenure as president of the clerical regime. The Iranian regime is the world’s top executioner of women. Since the beginning of 2019, it has executed at least 11 women which is an escalation in the number of executions of women compared to the 9 women executed during the entire year 2016, ten women in 2017, and 6 women in 2018. As a consequence of the clerical regime’s failure to categorize deliberate murders according to their degrees, anyone committing murder is sentenced to death, regardless of their motives. Many of the women convicted of murder in Iran are themselves victims of violence against women and have committed murder in self-defense.