IRAN - According to the “2019 Iran Human Rights Monitor Annual Report”, torture and corporal punishment are a common practice in Iran’s prisons. 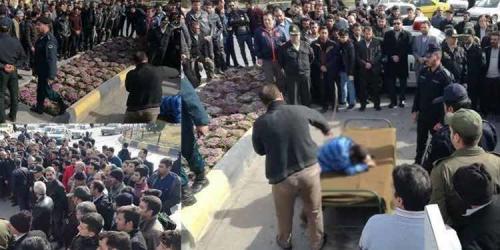 According to the “2019 Iran Human Rights Monitor Annual Report”, torture and corporal punishment are a common practice in Iran’s prisons and is also mandated by law. One such example is flogging, used for more than 100 offenses in Iran, which has been institutionalized by the regime in its Islamic Penal Code.
80 rights activists and human rights lawyers, 90 peaceful protesters, 100 people charged with robbery, relations outside of marriage, child abuse, kidnapping and not observing Islamic Hijab were sentenced to flogging.
An 80-year-old woman was flogged in the Khoy Judiciary, and was then immediately taken to prison despite her poor condition on November 28, 2019.
Peyman Mirzazadeh, a Kurdish singer held at Urmia Prison in northwestern Iran, was flogged with 100 strokes of lashes on July 28.
The public flogging sentence for a man was carried out on July 4, in the city of Ahvaz.
In February, the Chief Justice of North Khorasan Province said that five people were sentenced to flogging for negligence and that the flogging sentences had been carried out. The men were administrators in the North Khorasan Medical Sciences University.
The public flogging sentence for a man was carried out on January 6, in southeastern Iran. The man was identified as Esmail Arbabi and was flogged for the second time in Iranshahr on charges of robbery. According to eyewitnesses, the lashing was so violent that the victim passed out and was taken to the hospital unconscious.
Iran’s courts continued to hand journalists, labour rights activists, lawyers and human rights advocates lashes on bogus national security charges.
At least 80 rights activists and human rights lawyers were sentenced to flogging. Meanwhile, 90 citizens were sentenced to flogging for taking part in peaceful gatherings or protesting the regime’s policies.
Close to 100 people were sentenced to flogging for charges that include robbery, relations outside of marriage, child abuse, kidnaping, and, not observing Islamic hijab. In July, an unknown number of men and women were each sentenced to 74 lashes for not observing compulsory veil.
Amputation
In late October, Iranian regime authorities in Mazandaran Province, northern Iran, amputated the hand of a man charged with theft. The unidentified man has reportedly confessed to 28 cases of robbery from homes, and was punished based on the regime’s laws, according to a statement issued by the local Justice Department. It is worth noting that Iran’s regime is known for its method of obtaining forced confessions from prisoners.
Despite the significant number of such horrific sentences, a senior judicial official criticized the lower rates of these cruel punishments. Iran’s General Prosecutor expressed regret that a number of “divine punishments” are set aside to save Iran from being condemned by international bodies.
In comments carried by the Fars News Agency, Mohammad Jafar Montazeri said that the hands of thieves had to be amputated but that “unfortunately, so as not be condemned on human rights issues in the United Nations, we have abandoned some of the divine laws.”
Twenty-three prisoners convicted of theft are now languishing in the Greater Tehran Prison, Fashafoyeh, awaiting hand amputation. Investigations show that prisoners are sentenced to amputation on charges of petty crimes. Most of them have stolen property which amounts to 5-10 million tomans (Around 300-600 USD).
In August, seven people charged with robbery were sentenced to hand amputation, finger amputation, and flogging in Tehran.
According to the state-run Khorasan daily, the 8th Branch of the Tehran Criminal Court sentenced the head of the “robbery” gang, identified as Ali to hand amputation while his accomplice identified as Shahin was sentenced to the amputation of four of his fingers in his right hand.