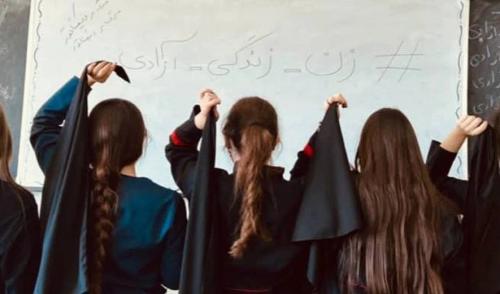 At least 201 people including 23 children, have been killed since the nationwide protests began a month ago. Additionally, many school children have been arrested with the Education Minister stating that the detainees were sent to “psychiatric centres” to be “corrected” and will be returned to school once they have been “corrected.”
Recalling the inherent human right to protest, especially children and adolescents, Iran Human Rights calls on UN mechanisms for the right of children and all Member States to pressure the Islamic Republic to immediately release all the detained children and start international proceedings against the perpetrators of their murder.
Iran Human Rights Director, Mahmood Amiry-Moghaddam said: “Iranian children and adolescents have the right to enjoy a free life and education in an equal environment, free of the government’s ideological teachings. It is the Islamic Republic leaders and officials who need ‘correction’ of their medieval outlook. We ask governments worldwide to summon Islamic Republic ambassadors in their countries and educate them of children’s basic and inherent rights.”
In an interview with Shargh Newspaper yesterday, Education Minister Yousef Nouri stated: “We don’t have any school pupils in prison and in the cases where they have been arrested, it’s to do with reform and education, they’re in psychiatric centres and they’ll be returned to the school environment once expert friends have done their work.”
Asked if that means school pupils were arrested in the protests, he said: “Under such circumstances and at this stage, school pupils may become anti-social characters, and we want to correct them.”
Iran Human Rights once again draws the attention of the international community to the systematic violation of children’s rights by forcing them to learn ideological, xenophobic, inhumane and anti-social teachings and strongly condemns their arrest for protesting. All detained protesters, especially the children, must immediately and unconditionally be released, and the Islamic Republic authorities, including the current Education Minister, should be held accountable for breaching their rights.