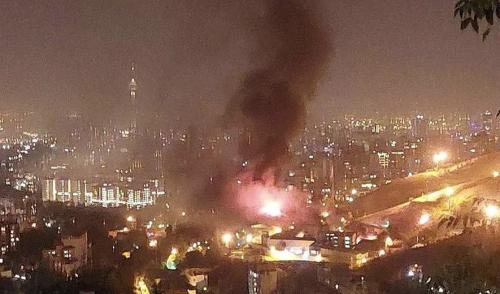 Evin Prison: Iran Human Rights Calls for Urgent UN Mechanism to Prevent Further Atrocities
Videos from Evin Prison last night showed the notorious prison burning, along with sounds of gunshots and explosions. Simultaneously, special forces were deployed to the prison without any explanation.
From the early hours of this morning, official Islamic Republic media started publishing their own account of events with death and injury numbers. According to the Judiciary’s Mizan news agency, four prisoners were killed and 61 injured last night. Ten prisoners were taken to medical facilities and four are reported to be in critical condition.
Recalling the Islamic Republic’s long history of concealing facts and underlining its history of mass prison killings and systematic lying by its officials, Iran Human Rights rejects the official account. Furthermore, the organisation has received reports that special forces were deployed to incite prisoners and set the grounds for a crackdown.
Thus, the only way to determine the facts and hold the perpetrators of this tragedy accountable is for the international community to urgently establish an international mechanism under the supervision of the United Nations.
Iran Human Rights Director, Mahmood Amiry-Moghaddam said: “It’s more necessary than ever to establish an independent mechanism under the supervision of the United Nations to investigate the killing of protesters and events at Evin and other prisons, and prosecute the perpetrators. This mechanism must be established before a bigger tragedy occurs.”
Iran Human Rights has also received multiple reports that some political and ordinary crime prisoners were beaten with batons.
On October 9, protests were reported at Rasht Central Prison (Lakan). According to reports, at least six prisoners were killed by prison guards. Iran Human Rights continues to investigate the events and has been unable to verify the number or identity of those killed at the prison.
Iran Human Rights emphasises the need for a more active role by the international community, the United Nations in particular, and calls for the establishment of a special international mechanism to investigate the systematic violation of Iranian people’s rights by the Islamic Republic.