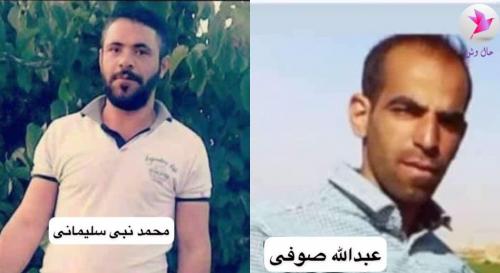 Execution of two prisoners in Torbat Jam prison on November 14
Mohammad Nabi Soleimani (Rigi) and Abdullah Sufi (Golmir Rigi)
According to Hale Vash, Monday, November 14, the death sentence of two Baloch prisoners, who were previously sentenced to death due to drug-related charges, was executed in Torbat Jam prison.
The identity of these two citizens: Mohammad Nabi Soleimani (Rigi), 31 years old, son of Gholam Sultan, single, and Abdullah Sufi (Golmir Rigi), son of Abdul Ahad, married with one young child, both from Saleh Abad city, Khorasan Razavi province.
These two prisoners were arrested by the forces of the Border Regiment while they were riding in a car returning to their home, and based on false reports, the agents took them out of the car and detained them without any materials. A few days later, after seizing a small shipment of drugs, it was registered in the name of these two people. These people have repeatedly denied the accusations during the interrogations and in front of the judge, but the judge Waziri from Zabul has issued a death sentence for them regardless of the statements of the defendants. According to this report, the authorities of Torbat Jam prison planned to execute them on November 16 without informing the families of these prisoners.