IRAN. FORCED TO FLEE COUNTRY, HE RISKED THE DEATH PENALTY FOR BEING GAY 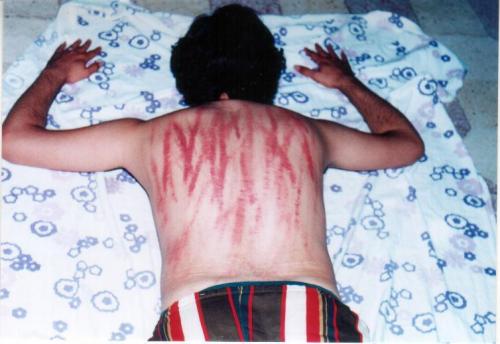 the Persian Gay & Lesbian Organization has released photos and details of a 22 year old man it says was given 100 lashes for being gay.  The exiled organization identifies the man only as "Amir".
The group said in a statement that "Amir" escaped Iran following his incarceration and after he was threatened with re-arrest and execution but did not identify the country where he now is living.
He was arrested at a party, was convicted and had to pay a fine. On several more occasions he was arrested and put in custody by police, the Basij - the fundamentalist militia - and the Revolutionary Guard.
During his last jailing he was whipped with a lash 100 times as part of his sentence.
The organization said that authorities have infiltrated gay sites on the internet posing as gays and entrapping others.
"This is a further example of the violent homophobia of the Iran’s Islamic fundamentalist regime," said Brett Lock of the British LGBT rights group OutRage!