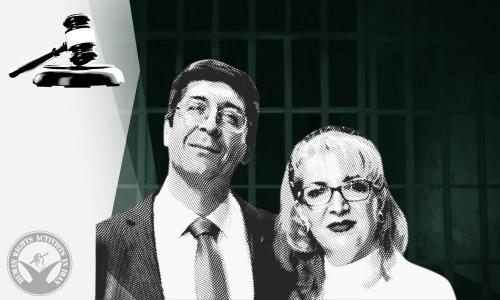 Hamid Ghara-Hasanlu, a radiologist doctor, was sentenced to death in a case related to nationwide protests. In the same legal case, his wife, Farzaneh Ghara-Hasanlu has also been sentenced to 25 years in exile imprisonment in Ahvaz. Without giving any details, Iran’s Judiciary announced that in this legal case, five people were sentenced to death, and eleven others, including three children, to imprisonment.
According to HRANA, the news agency of Human Rights Activists, in Karaj, five people, including physician Hamid Ghara-Hasanlu, were sentenced to death for killing a Basij militia force.
An informed source told HRANA that Ghara-Hasanlu was beaten harshly during detention, causing broken ribs and lung bleeding. During the last two weeks, he underwent surgery three times. Nonetheless, his family is not allowed to see him in the hospital.
On November 30, 2022, The Karaj Revolutionary Court began the trial of several people arrested at protests for killing a Basij militia force. The defendants were charged with “spreading corruption on earth through committing crimes against national security.” The defendants include Seyyed-Mohammad Hosseini, Reza Aria, Mehdi Mohammadi, Shayan Charani, Mohammad-Amin Akhlaghi, Hamid Gharah-Hassanlu, Farzaneh Gharah-Hasanlu, Reaz Shaker Zavardehi, Javad Zargaran, Behrad Ali-Kenari, Ali Moazzami Goodarzi, Mohammad-Mehdi Karami and three teenagers Mehdi Shokrollahi, Arian Farzamnia and Amir-Mehdi Jafari.