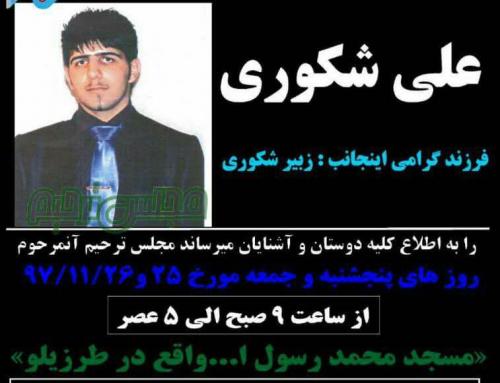 Ali Shakouri, a resident of the Tarzilloo village in Orumiyeh, was executed at Choobidar prison in Qazvin on 11 February 2019. He was arrested four years ago on the charge of murder and sentenced to death.
“This Kurdish civilian, who was 21 years old at the time of his arrest, injured a person following an argument and was involved in an accident when transferring him to the hospital. Ali Shakouri left the place after the accident, fearing that the victim had died. The injured person lost his life and Ali Shakouri Rad was arrested for murder later on,” a reliable source told KHRN.
According to the source, Ali Shakouri was sentenced to death on the charge of deliberate murder upon being arrested and he was executed after four years of imprisonment.