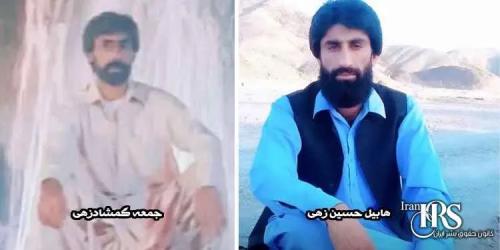 Three Baloch prisoners executed in Zahedan and Zabul prisons on 22 October.
Mohammad Zarakzahi in Zabol prison, and Juma Gumshadzahi and Habil Shahnawazi (Hossein Zahi) in Zahedan prison.
At dawn on Saturday 22 October 2022, 3 Baloch prisoners named Mohammad Zarakzahi, Juma Gumshadzahi and Habil Shahnawazi (Hossein Zahi) were executed in the prisons of Zabol and Zahedan for drug offenses.
Mohammad Zarakzahi, 30, son of Abdullah, originally from Zabol, was arrested in 2019 in Zabol for drug offenses and sentenced to death by the revolutionary court of that city presided over by Judge Babaei.
Juma Gumshadzahi (Gumshad Zahi), son of Ramadan, was originally from Zabol. He was arrested in Zahedan for drug offenses in 2019.
Habil Shahnavazi (Hossein Zahi), 30 years old, son of Abbas, married with 3 daughters, was a resident of Khash. He was arrested in 2020 and sentenced to death for drug offenses.