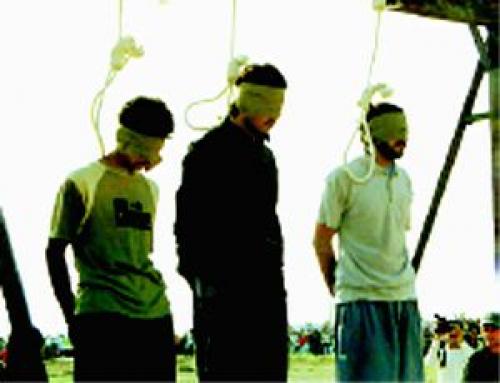 three men described as "thugs" who "disrupted public security" were executed in the northeastern Iranian city of Sabzevar, the Khorassan newspaper reported. The paper gave no further details on their identities, the precise convictions or on whether they were put to death in public or in prison.

DEATH PENALTY: HANDS OFF CAIN, TRUMP RETURNS AMERICA TO THE PAST

The association Hands Off Cain - Spes contra spem thus commented on the news of the resumption of federal executions in America.

After the Supreme Court of the United States stepped in, Daniel Lewis Lee was executed on July 14, 2020 morning by lethal injection at the U.S. Penitentiary in Terre Haute, Indiana.

According to Iran Human Rights, a prisoner was executed in Kermanshah Central Prison on the morning of 12 July 2020.

Death row inmates will soon be required to wear a hood when they are being executed to make the job of the executioner less traumatic, according to new rules announced by the Ministry of Justice (MOJ) that will take effect on 15 July 2020.

According to the HRANA news agency, a man was executed in Gorgan Central Prison on the morning of 9 July 2020. The identity of the prisoner has been established as Baset Seyedi, 43, from Bandar Torkaman.