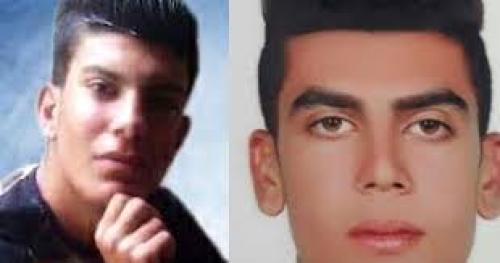 The Iranian authorities flogged and secretly executed on 25 April 2019 two boys under the age of 18, Amnesty International has learned.
Mehdi Sohrabifar and Amin Sedaghat, two cousins, were executed in Adelabad prison in Shiraz, Fars province, southern Iran. Both were arrested aged 15 and convicted on multiple rape charges following an unfair trial.
According to information received by Amnesty International, the teenagers were unaware that they had been sentenced to death until shortly before their executions and bore lash marks on their bodies, indicating that they had been flogged before their deaths. Their families and lawyers were not informed about the executions in advance and were shocked to learn of the news.
Mehdi Sohrabifar and Amin Sedaghat had been held in a juvenile correction centre in Shiraz since 2017. On 24 April, they were transferred to Adelabad prison, apparently without knowing the reason. The same day, their families were granted a visit with them, but they were not told that it was in preparation for their execution.
The next day, on 25 April, the families suddenly received a call from Iran’s Legal Medicine Organization, a state forensic institute, informing them of the executions and asking them to collect the bodies.