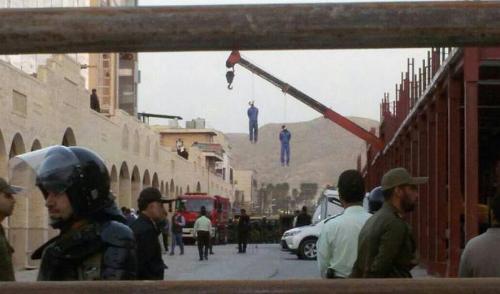 According to IRIB, on the morning two prisoners were hanged in public in Dogonbadan (the capital of Gachsaran County, Kohgiluyeh and Boyer-Ahmad Province).
The two prisoners were brothers, and they were sentenced to death on the charge of armed robbery from a jewellery store and murdering two of the shopkeepers.
The robbery took place in September 2017, and the prisoners were arrested on December 6.
Their execution was carried out in less than 100 days. Issuing death sentence in such a short time may result in the defendants’ right to a fair trial being denied.
The Chief Justice of Gachsaran County, Reza Mishan, said, “On February 4, 2018, the death sentence for the thieves was issued by the Revolutionary Court in Gachsaran, and it was approved by the Supreme Court on March 11.”