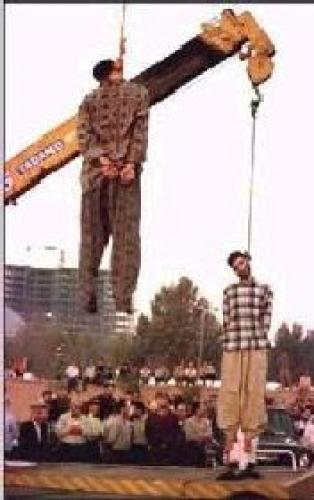 two men convicted of carrying out a deadly a bomb attack in Iran's restive oil city of Ahwaz were executed in public early morning.
"People were shouting down with America, Israel and Britain," reports said, adding that the two men -- Muhammad Ali Afrawi (minor at the time of the crime) and Mehdi Nawaseri -- were hanged at the scene of their crime, committed in October 2005. Their double bomb attack in a busy shopping area of the city killed six people and injured close to 100 others.
Khuzestan province's deputy governor Mohsen Farokh-Nejad had described the pair as "individuals with Wahabi and Salafist tendencies", a reference to hard-line Sunni Muslim ideologies opposed to the Shi'ite branch of Islam dominant in Iran.
Khuzestan is home to a large community of ethnic minority Arabs and had been plagued by a wave of bombings over the past year.