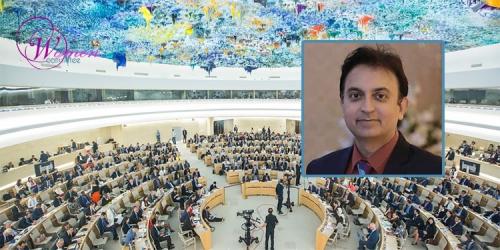 UN extends mandate of Javaid Rehman: Iran women treated as 2nd class
On Tuesday, March 23, 2021, the UN Human Rights Council voted to extend the mandate of Prof. Javaid Rehman, the UN Special Rapporteur on the situation of human rights in Iran for another year.
The resolution on the situation of human rights in Iran was adopted with 21 favorable votes, 14 abstentions and 12 votes against. The resolution urges the Iranian regime to cooperate with the UNSR and allow him to visit the country and have access to information to fulfill his mandate.
Prof. Javaid Rehman had earlier issued a report on March 9, 2021, on the plight of Iranian women and girls. Mr. Rehman called on the clerical regime in Iran to introduce urgent reforms.
In his report to the 47-member UN Human Rights Council on March 9, Mr. Rehman said, “Women and girls continue to be treated as second class citizens in Iran” citing domestic violence, thousands of marriages of girls aged between 10 and 14 each year, and continuing entrenched discrimination in law and practice.
“One of the most concerning issues in Iran today when it comes to the rights of women and girls is the issue of child marriage. The Government and other leaders in the country must raise the marriage age now and introduce further policies and programmes to reduce this practice in the country. In the first half of the current Iranian calendar year, over 16,000 girls aged between 10 and 14 years have married, according to official Government figures.”
In Iran, the UNSR noted, by law, a girl as young as 13 years can marry, while girls even younger can legally marry with judicial and paternal consent.
“The current legal marriage age is simply unacceptable. It is clear that child marriage is harmful for the development and well-being of girls, including in terms of education, employment and to live free of violence. While I note previous attempts to amend the law, pressure must now be brought to raise the marriage age, in line with Iran’s obligations under the Convention on the Rights of the Child,” Rehman said.
The report also raised serious concern about domestic violence against women.
“Existing protections against violence are insufficient to comprehensively safeguard women and children… I urge for further improvements to the bill before it is enforced and to extend support services for women and children who experience domestic violence,” Rehman said.
His report details how gender discrimination permeates almost all areas of law and practice, treating Iranian women as second-class citizens. He has provided the Government with recommendations to ameliorate these issues, including ratification of the Convention on the Elimination of All Forms of Discrimination Against Women. Iran is one of only a few states not to have signed the Convention.
“Blatant discrimination exists in Iranian law and practice that must change. In several areas of their lives, including in marriage, divorce, employment, and culture, Iranian women are either restricted or need permission from their husbands or paternal guardians, depriving them of their autonomy and human dignity. These constructs are completely unacceptable and must be reformed now,” he said.