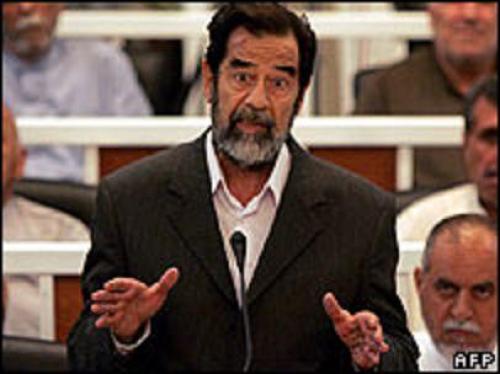 Saddam Hussein admitted in court that he gave orders that led to the execution of Shi'ite Muslims in the 1980s, but justified the punishment as his right as Iraq's president. In hours of proceedings, prosecutors read out documents, showed satellite images and played audio tapes in an attempt to link Saddam to the execution of 148 Shi'ites from Dujail after an attempt on his life in the village in July 1982.
"I referred them to the revolutionary court according to the law. Awad was implementing the law, he had a right to convict and acquit," Saddam said, referring to his co-accused Awad al-Bandar, the former chief of the Revolutionary Court.
"I razed them ... we specified the farmland of those who were convicted and I signed," said Saddam, who faces hanging if convicted.
"It's the right of the state to confiscate or to compensate. So where is the crime?"
Describing how gunmen fired machine guns as his motorcade drove through the town during a visit, Saddam said: "I saw the bullets with my own eyes."
Defence counsel had argued that Saddam, a Sunni who justified his harsh rule by the need for national unity, was Iraq's president at the time and that he acted within the law. "What we saw today was not Saddam admitting guilt, but admitting to the fact that he acted in accordance with his official duties and powers," said Nehal Bhuta, a legal expert from Human Rights Watch who had been monitoring the case.