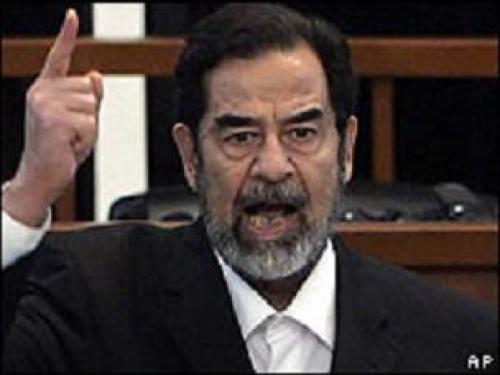 Saddam Hussein in court as the verdict was being read

Saddam Hussein was sentenced to death by hanging for crimes against humanity. Visibly shaken, Saddam shouted "God is great" as chief judge Raouf Abdul Rahman read out the court's verdict. He was tried over the deaths of more than 148 Shia Muslim men and boys in reprisal for a 1982 assassination attempt on the Iraqi leader in the town of Dujail.
Two of Saddam's co-defendants were also sentenced to hang: his half-brother and former intelligence chief Barzan Ibrahim, and Awad Hamed al-Bandar, head of the former revolutionary court. Former Iraqi vice president Taha Yassin Ramadan was sentenced to life in prison.
A death sentence or life imprisonment generates an automatic appeal, delaying any execution by months at least. Saddam has said he wants to face a firing squad as a member of the military, not the hangman as a civilian.
Following sentencing, he yelled: "Long live the people and death to their enemies. Long live the glorious nation, and death to its enemies!"
Clashes immediately broke out in north Baghdad's heavily Sunni Azamiya district where police battled men with machine guns. In Saddam's hometown of Tikrit, 2,000 people defied a curfew and carried pictures of the former leader through the streets.
In a sombre televised speech to the nation, the Iraqi prime minister, Nuri al-Maliki, said Saddam was "facing the punishment he deserves". Abdul Aziz al-Hakim, leader of the most powerful Shia Islamist bloc in the government, praised the verdict but said now was the time for Iraqis to unite. "What happened to him is a lesson for everyone - all tyrants will get what they deserve at the hands of those who suffer injustice," told his party's television channel.