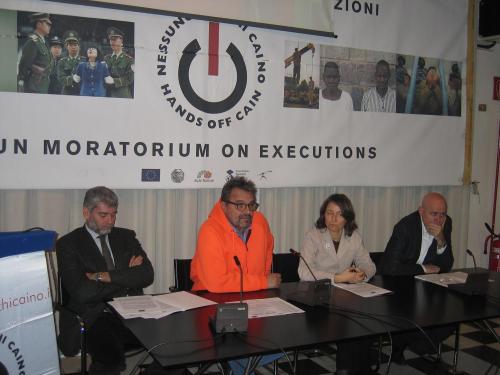 Hands Off Cain headquarters in Rome hosted the presentation of “The Last Day” (“Ultimo giorno”), a day of television dedicated exlusively to the death penalty, to be aired on December 31, 2005, on the satellite chanel ‘Planet’ from 7:30 am till midnight.
The event was realized in synergy with Hands Off Cain with the artistic superviosion of Oliviero Toscani.
Numerous films and documentaries will be shown throughout the day including: 'Dead man walking', 'Sacco e Vanzetti', 'La goccia', 'Monster's ball', 'We who are about to die', ‘Mr. Death’, 'Il signor morte', 'Amina Lawal: in God's name' and previously unbroadcasted material such as 'We on death row' by Oliviero Toscani, 'Hands Off Cain’ by Sandro Dionisio with Lindsay Kamp, 'Last request' by Gianni Del Corral and a reading by Vittorio Gassman of the passage on Cain in Genesis.
The recent execution of Stanley ‘Tookie’ Williams has once again brought to the limelight the problem of capital punishment, a practice not only concerning the United States but many other illiberal and authoritarian regimes, first among them being China which executes approximately 5,000 people every year. Hands Off Cain is working for the approval, by the end of 2006, of a resolution for a moratorium on capital executions, established by the UN General Assembly, with view to complete abolition of the death penalty.