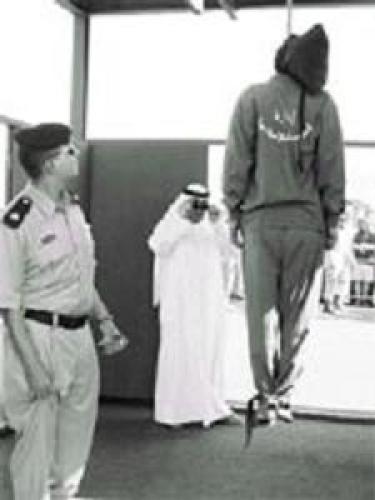 An execution in Kuwait

Kuwait carried out the executions of five men convicted of murder and drug smuggling. The bodies of the men were then put on public display from the gallows.
Kuwaiti Ministry of Justice and Interior officials identified three of the men as Kuwaitis and two as foreign nationals.
From Kuwait, Farraj Al Rukaibi was hanged for the kidnapping, rape and murder of a young girl, Saad Al Mutairi for murder and illegal weapons’ possession and Mohammed Al Shimmary for kidnapping and rape.
Indian national Shakarullah Ansari was hanged for killing his Kuwaiti employer in 2003, stealing money from him and burying the body.
Ansari had reportedly complained to the Indian Embassy three years previously that his employer beat him and did not feed him.
The authorities also hanged Pakistani Mayan Mohammed Iqbal Mayan for smuggling drugs into the emirate.
This is the largest number of executions to take place in Kuwait in one day.
The death sentences were issued to the men following their convictions in Kuwaiti courts, which allowed for appeals. They were also endorsed by Kuwait’s ruler Sheikh Sabah Al Ahmed Al Sabah, Kuwait’s Criminal Execution Office Director Judge Najeeb al-Mullah said in a statement.
The executions, carried out at Naif Police Station in downtown Kuwait City, drew a number of onlookers who were allowed to view the bodies afterwards as they hung from the gallows, witnesses said.
Kuwaiti judicial and interior officials have maintained that allowing the public to view those executed was a strong deterrent to crime. Kuwait’s parliament passed a law some years back allowing the public to view executions.
Kuwait’s Department of Reform Institutions and Verdict Executions also said that the five hangings would be the last to take place at the downtown police station, and that future executions would take place at Kuwait’s Central Prison, in the rural district of Suliabiya.