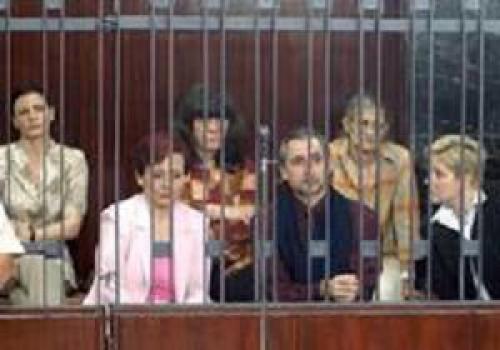 The medics will have a second and final right of appeal

a Libyan court sentenced five Bulgarian nurses and a Palestinian doctor to death for deliberately infecting hundreds of children with the HIV virus that causes AIDS. The verdict and sentences were announced by judge Mahmoud Haouissa. The six were accused of infecting 426 Libyan children with HIV at a hospital in Benghazi in the late 1990s. The prosecution had demanded the death penalty.
"In the name of the people and after reviewing the documents and hearing the arguments by lawyers of both sides, the court decided on death sentences," Haouissa said, winding up a seven-month retrial of the case.
"They caused the spread of the disease that caused the death of more than one person."
The medics had denied the charge. They were convicted in a 2004 trial and sentenced to death by firing squad. But the Supreme Court quashed the ruling in 2005 and ordered the case be returned to a lower court.
Rights groups the world over had rallied to the medics' defence to stop what they say may be a miscarriage of justice. Luc Montagnier, a French doctor who first detected the HIV virus, has said it was first present in the Benghazi hospital in 1997, a year before the medics arrived. But analysts say freeing the defendants would put the focus on alleged negligence and poor hygiene in Libyan hospitals, which Western scientists say are the real culprits in the case.