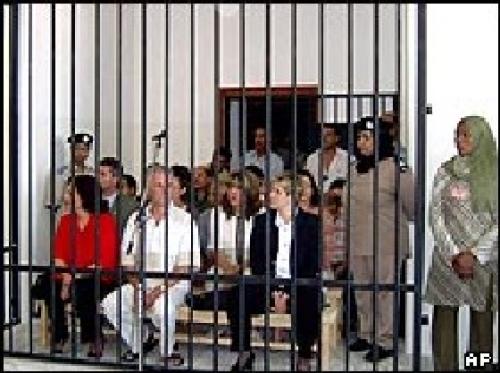 Libya's high court delayed a ruling on an appeal by six foreign medics sentenced to death for infecting hundreds of children with the AIDS virus. Judge Ali al-Allush said the case involving five Bulgarian nurses and a Palestinian doctor, who have already been in custody for six years, had been put back to November 15 but he gave no further details.
The decision was hailed as encouraging by Bulgaria and the European Union, but both urged Libya to solve the issue urgently as the accused have already spent six years in prison.
Angry scuffles erupted outside the court at the judge's decision, with families of some children trying to get into the Tripoli courtroom and forcing officials to shut the doors to keep them out.
Chants of "Kill them or kill us" echoed round the building as security forces tried to control the demonstrators, some of whom vented their wrath against Othman al-Bizanti, the nurses' defence lawyer.
The six defendants had been condemned in May 2004 for injecting 380 children with blood transfusions infected with HIV, the virus that causes AIDS. Forty-seven of those children had died. The accused maintained their innocence. Two nurses and the doctor initially confessed to charges but later said police had extracted the confessions with torture, including beatings and electric shocks.
The European Union, which has warned that the case could harm relations with Tripoli just as the former pariah state returns to the international fold, called for a rapid resolution of the case.
"I welcome this decision. It indicates that the Libyan supreme court accepts that the original trial needs additional consideration and that the death sentence .. cannot be confirmed," said EU external relations commissioner Benita Ferrero-Waldner, who visited Tripoli the previous week.
In Sofia, Bulgarian President Georgi Parvanov expressed hope the delay "opens the way to a full investigation of the truth about the tragedy and a just solution of the case of our compatriots, in whose innocence we have no doubt."
"An overall and unbiased look at the evidence on the case will lead to an overturning of the sentence and the quick return to Bulgaria of our medics," he added. But Doctor Zdravko Georgiev, husband of one of the condemned nurses, told Bulgarian national radio in a call from Tripoli that the delay "was bad because they will have to spend another six months in jail."