LIFE IMPRISONMENT. HANDS OFF CAIN URGES THE CONSTITUTIONAL COURT TO AFFIRM THE RIGHT TO HOPE IN OUR COUNTRY 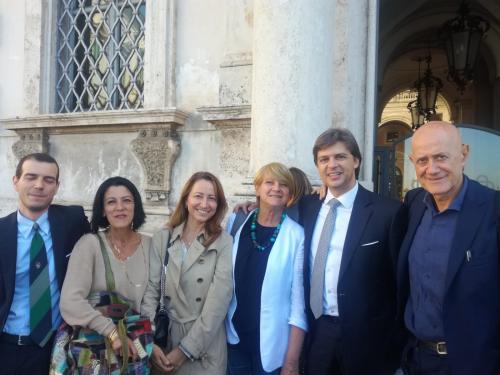 The hearing of the Constitutional Court called to decide on the compatibility of the life sentence without parole with the constitutional principles in relation to the granting of premium permits in the Cannizzaro and Pavone cases, was concluded. Tomorrow the Constitutional Court will consider two other cases related to the 4 bis.
Hands Off Cain participated in today's hearing with Avv. Andrea Saccucci, who has argued the reasons for the admissibility of the intervention as a third party and with the directors Sergio D’Elia, Rita Bernardini, Maria Brucale and Elisabetta Zamparutti. A similar request was made by the National Ombudsman for Detainees, by the Union of Penal Chambers and by a lifer, Marcello dell'Anna.
"We are faced with a historic occasion, that of recognizing, as the ECHR has already done in the Viola vs Italy case, that the repentance of a lifer can be evaluated by the surveillance magistrate also on the basis of true repentance and not just on the basis of the utilitarian idea of collaboration,” stated the leaders of Hands Off Cain. "We are confident with the Constitutional Court and even if not admitted as an intervening third party, we will continue to monitor the implementation of the Viola vs Italia sentence in the eyes of international organizations," continued Hands Off Cain. "To this end we have informed the Committee of Ministers of the Council of Europe (Rule 9 (2)) to take into account the monitoring that Hands Off Cain will conduct on the execution of the ECHR sentence. Furthermore, we have initiated the first collective action of 252 persons serving life sentence without parole at the Human Rights Committee of the United Nations and we raised the issue also in the UN Universal Periodic Review (UPR) process concerning Italy which will be discussed in November in Geneva."
“No more false alarms!” concluded D’Elia, Bernardini, Brucale e Zamparutti. The end of the collaboration with justice as the only criteria for evaluating repentance will only return power to the magistrates of surveillance that they had before 1992, and that power is to evaluate case by case, having heard the anti-mafia Prosecutor’s Office, the change of the inmate and the true level of their threat.