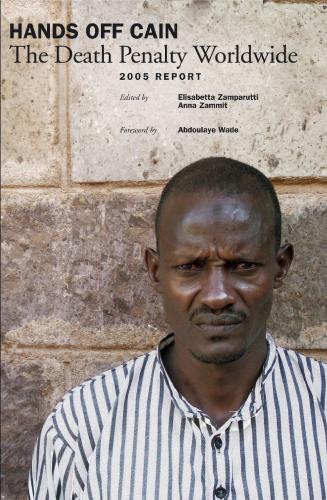 Hands Off Cain, together with the Transnational Radical Party and the National Association for Criminal Defence Lawyers, presented its 2005 Report - The Death Penalty Worldwide at UN Headquarters in New York.
Hands Off Cain’s 2005 Report on the death penalty is dedicated to the President of Senegal Abdoulaye Wade, author of the foreword and the recipient of the Abolitionist of the Year 2005 Award.
The drive to abolish the death penalty is making slow but steady progress around the world even though executions are still carried out in many major countries, including China. Last month, Liberia became the 139th country to decide, through legislation, to abolish the death penalty. Of those 139 countries, 88 -- including Liberia -- have totally banned capital punishment; 10 have done so for ordinary crimes; one -- Russia -- has pledged to do so as a member of the Council of Europe; five are observing a moratorium; and 35 are considered de-facto abolitionists since they have not carried out any executions for at least 10 years. Fifty-seven countries retained the death penalty, down from 61 in 2003 and 64 in 2002. Among the 57 countries that have the death penalty in their legal arsenals, only 25 conducted executions in 2004, compared with 30 in 2003 and 34 in 2002. As a result, the number of executions dropped to 5,523 last year from 5,607 the previous year. Asia is responsible for most of the executions, with a total estimated at 5,450 in 2004. China leads with at least 5,000 (90.5 percent of the world's total), followed by Iran with 197, and Vietnam with at least 82. The Americas would be virtually death penalty-free were it not for the 59 people put to death in the United States, the only country in the western hemisphere to execute anyone in 2004. in the United States, the 2004 figure was down compared with the 65 executed in 2003 and 71 in 2002. Africa also showed a decline last year, with at least nine executions -- in only three countries, Egypt, Sudan and Somalia -- down from 56 in 2003 and 63 in 2002. Europe was virtually a death penalty-free zone except for Belarus, where 5 people were put to death last year. At the event intervened Elisabetta Zamparutti (Treasurer of Hands Off Cain and HOC Moratorium Campaign Co-ordinator), Matteo Mecacci (TRP Representative and Moderator), Anna Zammit (HOC Board Member and Report Co-Editor) and Sandra Babcock (Attorney at Law and NACDL representative).